Traveler Story: This Is Why Zanzibar Is The Ultimate Luxury Destination

Wendy Watta (@wattaonthego) is a Kenya-based traveler and editor of Nomad Magazine Africa, and her she tells Travel Noire why a trip to Zanzibar is a must for anyone that wants to see one of Africa’s greatest island destinations.

Travel Noire: Why did you decide to go to Zanzibar?

Wendy: I love exploring the East African coastline not only for the pristine beaches but also for the Swahili culture and food. Zanzibar is the only part of the coastline I hadn’t been to until this year. I had heard that it was really similar to Lamu Island, which is my favorite place in Kenya, with some nice beach towns coupled with a well-preserved Old Town that’s actually a UNESCO World Heritage Site. I just had to go check it out for myself. Travel Noire: Where did you stay?

Wendy: This particular solo trip was all about luxury and I actually spent two days in the Stone Town and another five days in South Eastern Zanzibar. In Stone Town, I stayed at Park Hyatt where Zanzibar’s Omani influence is very distinct in the architecture and decor. The story behind the old wing which dates back to 1847 (and is a good example of a traditional Zanzibar mansion) was also pretty interesting. In the South East Coast, I stayed at three all-inclusive hotels with some really amazing tropical cocktails. The first, Zawadi, is an intimate collection of six upscale villas with an infinity pool that would have been perfect for an afternoon dip with a lover, which only rubbed in the fact that I was traveling solo. They had an awesome local band during dinner that left me nostalgic with their Swahili taarab music.

I then stayed at The Palms which has only six villas and was therefore very intimate and personalized, followed Baraza Resort & Spa whose architecture is reminiscent of the palaces of Omani Sultans who ruled Zanzibar in the 1600s. Their spa, which resembled a Moorish harem, was decked in gold and white and was hands down the most opulent I have ever seen. 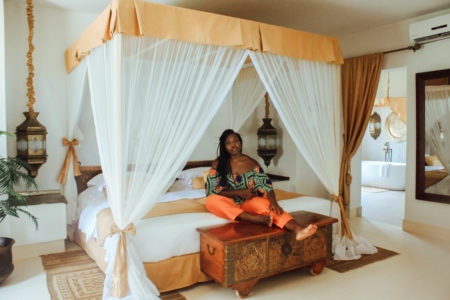 RELATED: The 10 Most Beautiful Black-Owned Hotels Around The World

Travel Noire: Where was your favorite place to eat?

Wendy: Forodhani Night Market is a glorious seafront night market bustling with tourists and locals alike, with numerous vendors selling various dishes all being cooked on the spot. Food is really cheap and my first instinct was to rush to any of the open tables where fried and grilled seafood was layered, with everything ranging from barracuda, squid, octopus, lobster and crab to shrimp. I was warned that the seafood is not always fresh because the vendors don’t refrigerate remnants from the previous day. You should however definitely try Zanzibar pizza, which the vendors are all really proud of. The technique for making it is very specific, and the toppings are actually folded inside the dough instead of being layered on top. Mine was actually more like a banana and Nutella stuffed crepe than a pizza. I also really enjoyed chips mayai, which is basically a french fries omelet and is really popular in Tanzania. By law, alcohol is not served at the market.

Wendy: Swimming with turtles and getting to feed and learn more about them at a conservation pond which is an initiative run by the local community. We actually stumbled upon the place during an impromptu trip to Jozani Forest. That was pretty awesome.

Travel Noire: Would you go back?

Wendy: I would definitely go back. One of the most popular spots with tourists on the archipelago is Nungwi which is up North, and I am keen to sign up for a yoga retreat there. I have also recently taken up scuba diving and given that Zanzibar has some of the world’s top dive sites, I would love to go explore its underworld. 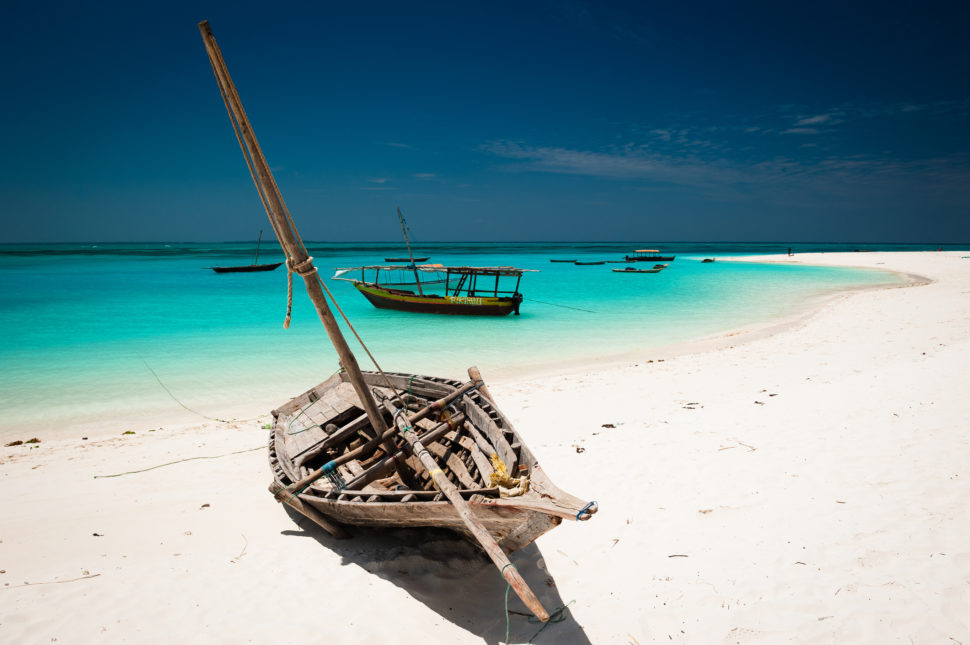 September means that the joys of summer are coming to an end.  Temperatures are dropping, school is about to begin, and those long summer days will begin to get shorter and shorter. It sounds depressing but there is light at the end of the tunnel. Peak travel time is over which means that September is […] The continent of Africa is home to more than 1.3 billion people, 54 countries, and where you will find some of the world’s most exotic beaches and experiences. Booking a trip to Africa?  Here are the top experiences, according to TripAdvisor: 1. Marrakech, Morocco The “Red City” of Marrakesh is a magical place, brimming with markets, […] The Most Beautiful Airbnbs In Zanzibar, Tanzania

Planning a trip to Tanzania? Be sure to check out the Zanzibar archipelago located in the Indian Ocean, just a few miles from the coast of Tanzania. Known as “the spice island,” Zanzibar is renowned for its history and culture, picture-perfect beaches, and its mix of influences from Africa, Arabia, India, and Europe. If that […]