How to Visit a Balinese Temple

A trip to Bali isn’t complete without a visiting one of the island’s 22,000 temples.  There is a mode of conduct and dress that Balinese temple-goers must adhere to.  Tourism has steadily increased to the ‘Isle of Gods’ annually, this increase of visitors to the island has led to a surge of travelers seeking irreverent Bali bliss.  Seemingly, respect for the local culture has waned.  In accordance to the rules of dress, many popular temples like Uluwatu and Tanah Lot hand out sarongs to the hundreds of daily visitors.  However, the smaller village temples that are encountered by a wandering motorbike of travelers do not have these resources or the manpower.  These temples are integral to the lives of the rice paddy and vegetable farmers that make their daily offerings and deserve the same respect as the larger, more popular ones.  Here are some things to keep in mind when entering a Balinese temple.

Both men and women should wear clothes past the knee and shoulders covered.  A long sarong (kain kamben ) and a temple scarf worn around the waist are mandatory temple attire.  There is no need to buy a new sarong, the one you take to the beach will do. The Balinese frown on open displays of public affection, so keep the touchy feely stuff for the when you exit.  Other conduct tips to follow are:

-Always give and receive with your right hand.

Don’t Enter the Temple when Menstruating

Don’t Step Over or Tread on Offerings

Small offerings called canang sari are often left on the ground. Palm leaves are woven into a small box and flower petals herbs, money, snacks are inside. These offerings are to appease the spirits. Be careful where you’re walking.

As long as you remember that the temple you are in is a space of reverence to the Balinese people, and treat it as such, your temple visit is sure to bring you the happiness and enlightenment you seek.

This story was curated by Diana O’Gilvie. 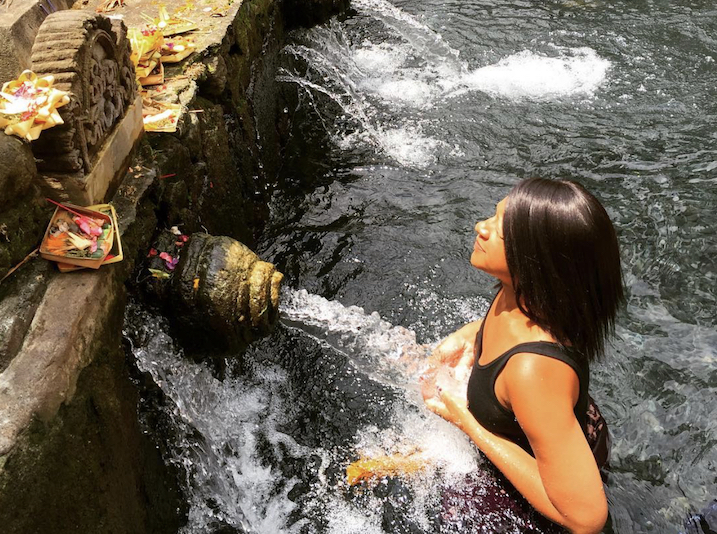