Two years ago, traveler Akanni Thomas was gifted a surprise trip to Ghana from her father. It was her first trip that required a passport, but one that she was very well groomed for. She learned about African cultures and dances from her mother who was an African drummer and teacher, and her father specifically taught her to trust from the tour staff, “the good brother Mohammed.” Despite her upbringing, neither parent prepared her for the whimsical journey she’d experience that would lead to a path of spiritual healing and discovering her Ghanian-Muslim soulmate, husband, and now business partner, Isahq Mohammed.

It was in November 2018 when Akanni would embark on a journey to Ghana hosted by Africa for the Africans Tours to explore historical sites and popular destinations such as the President Kwame Nkrumah Mausoleum, the former home and library of W.E.B. Dubois in Accra, and small villages known for kente weaving and creating and printing Adinkra symbols.

Upon arriving in Ghana, Akanni felt right at home in a sea of beautiful chocolate faces.

“I remember the smiling faces, the hard-working grind of the people, and the sound of rhythmic music bumping all around us,” she said. “These are my people!”

That’s when she first laid eyes on Isahq, his gray and black striped shirt, and gripping biceps at the Ghana Ports and Harbours Authority.

“My first thoughts, quite honestly were, ‘Omg he is the most beautiful man I have ever seen, he reminds me of Shaka Zulu!’” she recalled.

At 41-years old, Akanni has had her share of bad relationships and a man was nowhere in sight for her. The tour director introduced him as “Mohammed a good brother is here to provide extra security, which is especially important for currency exchange.”

A few days into her trip, Isahq presented Akanni with a gift from his heart, an orange and brown Adinkra printed dress. He had it for years, waiting for his future wife to fit the dress perfectly.

“I just knew when I saw her I felt it in my spirit I heard God say, ‘Yes this is your wife’ and I just knew,” he said.

In a matter of days, Isahq and Akanni grew closer, sharing stories about their families and their views on the effects of heinous crimes against humanity. They were a picture-perfect love story made in Ghana. He comforted her after she broke down in tears in the town of Assin Manso, where many were forced to have their ‘last bath’ before being dragged off to the dungeons to be sold as slaves. Their nights together usually ended under the coconut trees and the picturesque moonlight.

On Day 9 of her 10-day trip, he uttered the words, “you should be my wife” for the first, but not last, time. She declined out of fear and “don’t come back with an African husband” warnings from others.

Their romance made in Ghana traveled back home with her to Cleveland, leading to weekly proposals and hours-long conversation. Once a week, Isahq would propose to Akanni during hours-long video calls.

“She says no and she would think on it many times but I only heard her say ‘yes.’ I was so happy I told everyone right away!,” Isahq expressed.

Isahq and Akanni had a traditional wedding and engagement ceremony at his aunt’s compound on March 14, 2019. The couple married five more times, jumping the broom twice at One Africa Resort and having an all-white wedding at Coconut Grove Resort.

Akanni began to prepare to permanently repatriate to Ghana in October 2019, planning a massive wedding featuring a tour that birthed their joint company Pride of Ghana Tours. The company hosts unique tour experiences in Ghana and the inaugural Black Love Tour is their most popular one yet. Inspired by their love, this tour guarantees romantic excursions across Ghana.

The tour company hopes to tap into Ghana’s local poetry scene with a spoken word tour with Cleveland based group The Distinguished Gentleman of Spoken Word. The upcoming Mother’s Day Pilgrimage features a Ghanian cooking class, workshops on traditional African spirituality, herbal medicine making, and a relaxing day at the spa.

Be on the lookout for the next 2nd Annual Black Love Tour in November. 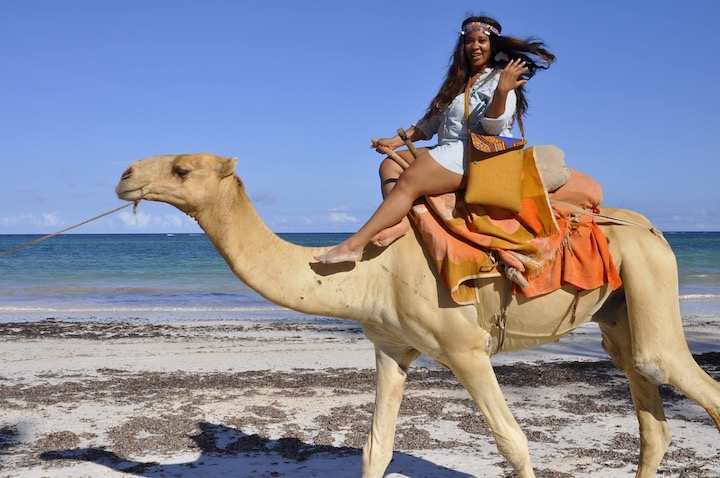 Greensboro, North Carolina native Crista Greenlee is an avid traveler who loves visiting new countries. Now based in Queens, she has had the opportunity to visit 41 countries in her lifetime and even lived in South Korea for three years. Over 12 years ago, she traveled to Ghana for the first time and since then, […] Knowing where your ancestors come from can be beneficial to our growth and future. An NYC-based nonprofit organization, Birthright AFRICA has this belief and is helping young adults of African descent to find out where their ancestors came from.  Birthright AFRICA also funds young people to explore NYC and Washington to learn more about black […]