Top Things to Do in Naples & Capri

Summer is roughly three months away; it’s never too early to start thinking about where you might jet off to during the busiest travel months of the year. If you think a hot Mediterranean getaway might tickle your fancy this summer, I’ve got just the destinations for you. Last summer, I hopped aboard a short flight from my humble abode in Paris to Naples then later took a boat to Capri. I spent about six days total city-hopping Southern Italy. Here’s what I loved about these two Italian destinations. Naples feels like a classic European city, having architecture from a much older century. But unlike a city like Paris, it’s not as preciously preserved. One might even find the city’s center slightly “run down.” But it adds to its charm. The buildings are tall and tightly placed together. Roads are narrow but don’t prevent people from zipping around in their scooters. The placement and height of the buildings provide much needed shade from the heat. Note: Naples in the summer was HOT.

Outside of the historic center you’ll find more modern buildings and shops (we popped into to H&M to buy a quick pair of shoes), but you’ll still be able to wander through beautiful passages and gallerias. 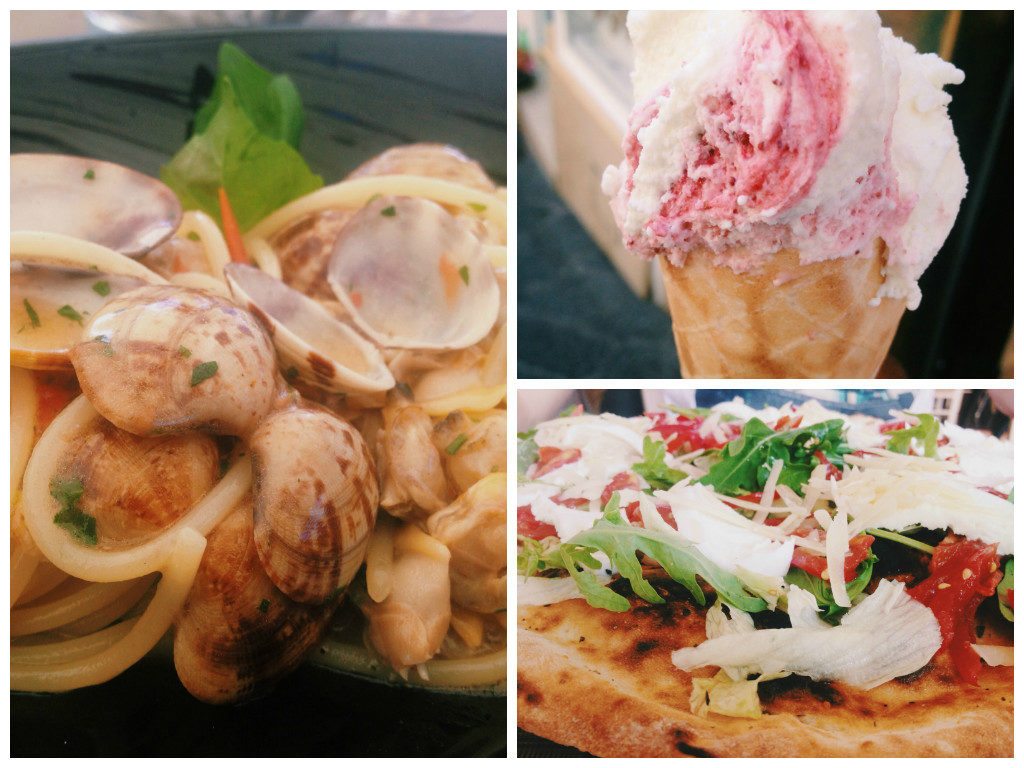 If you’re not eating carbs, skip Naples—actually skip Italy altogether. The food is what you might expect—pizza and pasta everywhere. But, it’s all soooo yummy.

In Paris, you can’t really take your chances on any random restaurant. But in Naples, that wasn’t the case. We popped into a little whole in the wall and had a delicious lunch with booze for about 15 euro a person. You can’t leave Naples without trying a brick-oven pizza. Pizza is said to have been invented in Naples, so you’re getting the real deal. And it’s crazy cheap.

And finally there’s the gelato. What to say about the gelato…? Eat it; it’s yummy, and it’s everywhere. I probably ate at least two cones a day (secretly three, but who was counting). 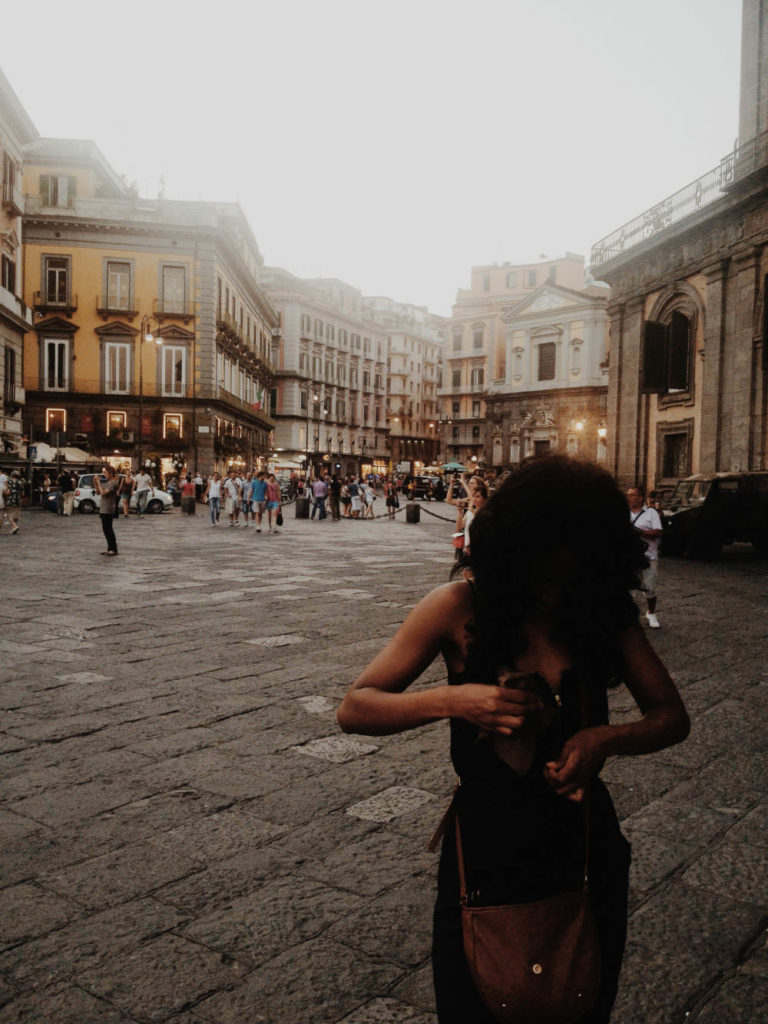 I learned that there was nothing particularly special about Pompeii when it was a living city, besides it being a port city. But the fact that it was so well preserved by its tragedy has made it invaluable to people of present day. You literally get to see a frozen day in the life of its former inhabitants.

Pompeii is only a short train ride from Naples and is worth venturing out to. I highly recommend taking a guided tour, which you can sign up for when you arrive at the train station, otherwise you’ll just be looking at ancient ruins without hearing the stories behind them. Note: one of the highlights of the tour is learning how the brothels worked and seeing a penis carved into the pavement that directed Pompeii men to said brothels. 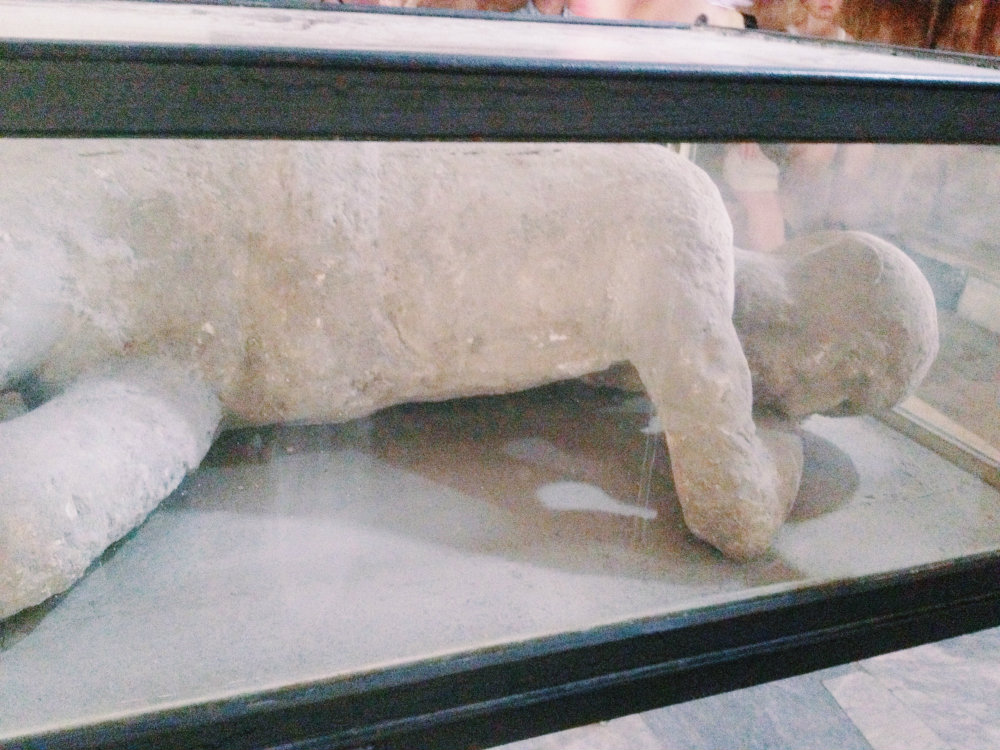 Then there’s the casts of the people ducking for safety. It was pointed out that a lot of the original relics of Pompeii aren’t actually in the city. They’re kept in museums or safe places while replicas help tell the city’s story.

One other memorable tourist attraction that was actually in Naples is the city’s underground water system. It’s a super cool (literally and figuratively) tour of underground passages that gives you a break from the heat. I don’t recommend it if you’re claustrophobic because there are extremely tight passageways—like, you literally have to walk sideways at certain points.

Other than that, walk around the city and get lost. Stumble upon its many churches. Hike to the top of its highest point and explore the more chichi side of the city.

Then Sail Away to Capri Capri is very different from Naples. It’s a resort town and always has been. Back in the day, Italian leaders would vacation there. So you won’t find the history that you find in Naples, but you will find GORGEOUS views. They’re everywhere. And I suspect it’s really hard to get a hotel room with a bad view because most hotels sit cliffside (from what I saw).

Capri is perfect for just strolling around and doing nothing. It has a bit of a Hampton’s vibe—the streets are lined with designer shops and people who look “upper crust.” But it also feels like a very small community. If you stay there for a couple nights, you’ll start to see some of the same faces over again, including the occasional celebrity (we saw Steve Tyler).

Dining is great, but pricey (although we chose quite a few Michelin restaurants). The gelato here is also amazing. There was one place I kept going back to. I don’t remember the name but I remember they’re open late; they’re close to the main square and there’s almost always a long line. 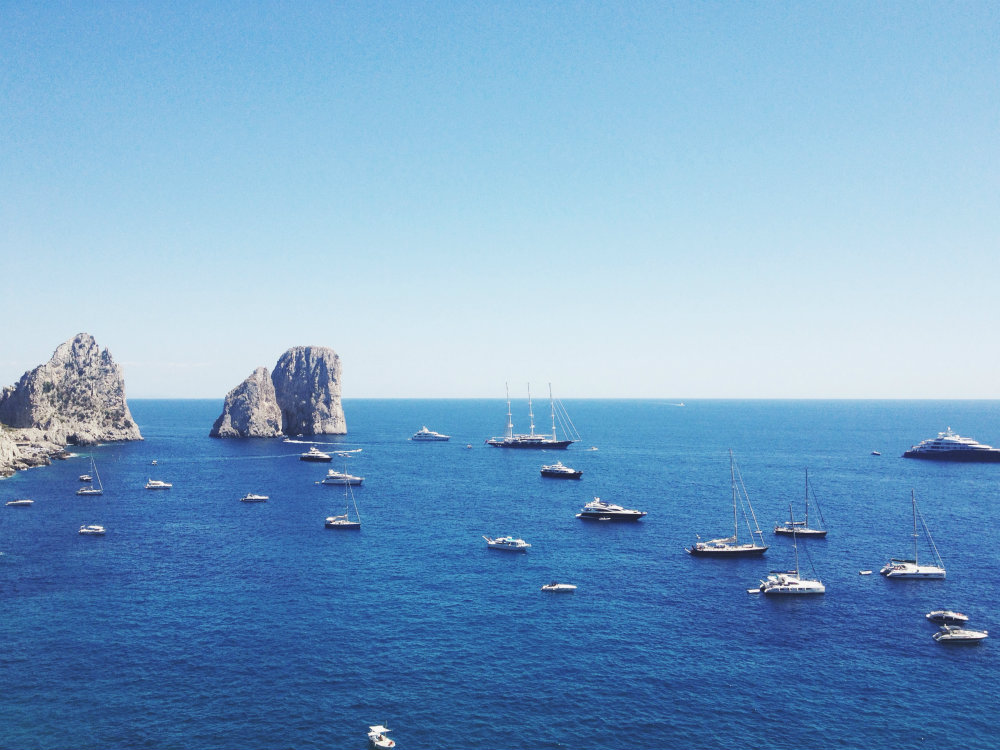 Beaching it up in Capri is an atypical experience.

First, if you’re not used to pebble beaches, you’ll have to get used to them because it’s the only type of beach Capri has; save a few slithers of sand here and there. And to get to the beach you have to hike down a winding cliff side path, which is beautiful. But be sure you’re hydrated because, again, it’s hot. You can save time and take the funicular down, but it might not put you by the beach you want to go to. The beach we went to (and I suspect this is the case for most of the beaches) required you to pay to enter and if you wanted beach chairs or towels, etc., you had to pay for that as well. You could also get “table service,” which was a nice treat, but it was pricey and not really worth it.

When all is said and done, the money you would spend to really live it up on a Capri pebble beach could buy you a boat rental (with a captain) for a half day, which is a much better way to enjoy the ocean. This occurred to us at the last moment so we didn’t actually have the chance to do it. But it gives us something to go back for next time.

I'm the founder of Un-ruly.com, a site dedicated to Black hair and content that creates conversations around both the surface and profound levels about image and identity. Through Un-ruly I a short film called "You Can Touch My Hair" and recently released, "Pretty," a documentary series that looks at beauty across the globe. I moved to Paris some years ago to learn French and have been enjoying being able to easily jump from country-to-country within Europe.