The Cultural Significance Of Comfort Food

Visit cities and towns throughout Thailand long enough and it’s only a matter of time before you come across Kai Jiew Moo Saap, a beloved omelette dish made with eggs and minced pork that is easily one of the more popular street foods found in the country. The dish is simple and differs greatly from western egg omelettes found in home kitchens and diners in the United States, but like the American breakfast omelette, Kai Jiew Moo Saap is commonly deemed a comfort food by many that grew up eating the light, fluffy dish.

Every culture throughout the world has dishes, snacks, and beverages that could be defined as “comfort food” or have a nostalgic or sentimental value while originating in or belonging to a specific region, culture, or group of people. Comfort foods can range from simple items that are enjoyed almost daily like American grilled cheese sandwiches to the more complex flavors in Oaxacan moles, or Jamaican oxtails, but at its core, a comfort food depends greatly on an individual’s personal and cultural upbringing. “When it comes to food, specifically what we may deem culturally as ‘comfort foods,’ a lot of the meaning behind it stems from a generational background,” says Cheryl K. Webster, a blogger at The Kashonna Files and a mental health clinician and 3rd year doctoral student studying Clinical Health Psychology and Neurological Psychology in Los Angeles. “These are foods that we grew up on that have been passed down from our ancestors, or foods that have created and maintained communities (i.e., Sunday dinners and potlucks),” Webster adds.

Soul food and Cajun dishes defined my own black American, Gulf Coast upbringing. Holidays and special events often featured my mother’s seafood gumbo and Sunday dinners alternated between freshly caught fish that was battered and fried, pork chops, or fried chicken, which was almost always served with baked macaroni and cheese, cornbread, and collard greens. Those dishes, according to soul food scholar and author of Soul Food: The Surprising Story of an American Cuisine One Plate at a Time Adrian Miller, are a part of the culinary tradition of black Americans that both remained in and left the South after the Emancipation Proclamation for cities in the North and West, only to bring their recipes and cooking techniques with them.

RELATED: This Black-Owned Restaurant Is Bringing Soul To Hollywood

“Soul food is the idea that African Americans, because of centuries of oppression, anything that we’re going to do is going to be the most soulful expression of humanity,” Miller said during a 2014 TEDx talk. While soul food and comfort food are in no way interchangeable, it’s the food of my ancestors passed on to my mother that have shaped my personal relationship with comfort food. 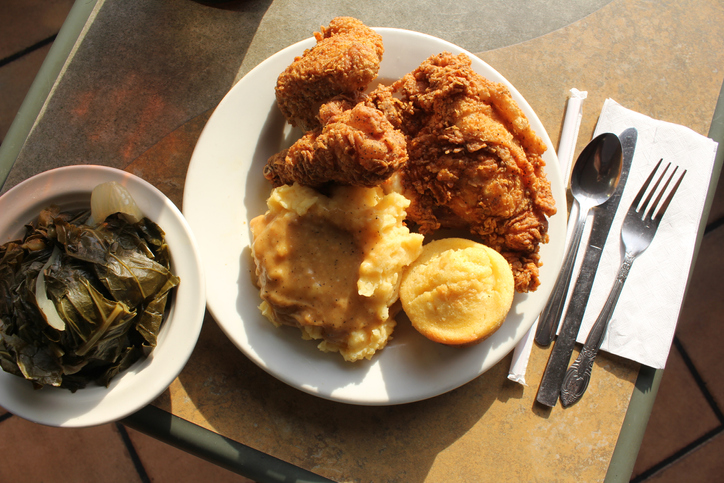 “The attachment aspect of comfort food can be very mental for most people, especially ones that may have migrated or immigrated to a different part of the world,” says Webster, noting how a desire for one to connect with their homeland can determine how they identify their comfort food of choice.

For first-generation American Alexander Nguyen, soups served to help combat Vietnam’s rainy season are his go-to comfort foods. “There are many versions of soup eaten throughout the country, but the common three are variations of phở, bún bò huế and, bún riêu,” says Nguyen, adding that even though the dishes have a practical purpose, they also help to foster community. “It’s comforting because those are dishes that are made during family gatherings. My grandma makes them all the time and it’s comforting because the soups mean something different for everyone.”

Greek-American chef and author Christina Xenos also turns to soup when she wants a taste of home. “Avgolemono Soup is Greek penicillin—a chicken soup made with either orzo pasta or rice that you fold an egg-lemon sauce into—it’s the first thing I ask my husband to make me when I’m feeling sick or just in need of some good comfort food.” Whether you’re using grandmother’s soup recipe to fight off a cold or recreating your dad’s signature dish, the emotional benefits of consuming comfort food, within reason, transcends cultures and can be just as enjoyable as the familiar flavors. “When comfort foods are not abused, it can assist with bringing people long-term eustress, which releases endorphins that can help to regulate your mood can keep your stress response system at bay,” says Webster, though it’s always a wise to never consume too much of a good thing.

From the Gulf Coast to Greece, we all have different ideas of what comfort food may be and how it should taste, but the feeling of love, security, and familiarity that comes with diving into a dish that means something special is one that we can all savor.