The Black Expat: Learning How To Be Comfortable With Being Uncomfortable

Meet Lené Hypolite, a 30-year old woman originally from Bermuda. Since the age of 17, Lené has lived in 5 countries across three continents.

She has lived in Bermuda, Venezuela, Toronto, Atlanta, and Amsterdam. She will soon relocate to Singapore for work and also split her time living in Tokyo. Lené holds a Master’s in International Economics and works in Financial Technology.

We had the chance to learn more about her life as a Black Expat. Travel Noire: What initially inspired or led you to move abroad?

Lené: I was really interested in learning Spanish when I was a teenager.  There was a program called Rotary Exchange where they would send high school students to different countries for a year.  I got to choose my top 10 countries that I wanted to live in.  Venezuela was number seven and that’s where I ended up going. I was only 17 at the time, but it was probably the best decision that was made because it fueled my love for travel and for living abroad.  I also became fluent in Spanish.

Travel Noire: How did you end up in Amsterdam?

Lené: I was living in Atlanta at the time that I decided to move to Europe, but I thought I was going to end up living in Barcelona.  I could understand the language, the weather was amazing, and the people were super nice.  While I was scoping out Barcelona, I decided to visit a friend in Amsterdam for the weekend.  As soon as I got into the city, I knew I was going to move there.  I’m big on energy and it was something about the energy of the city that had me captivated.

On top of that, the economy was much more stable than Spain, so there were much more employment opportunities in my field. I figured I’d be able to travel to Spain on the weekends! There’s also a huge Caribbean population in Amsterdam that not a lot of people know about.  This makes me feel much more connected to my roots than I would have in Spain.

Related: How To Spend A Day In Black Owned Amsterdam. 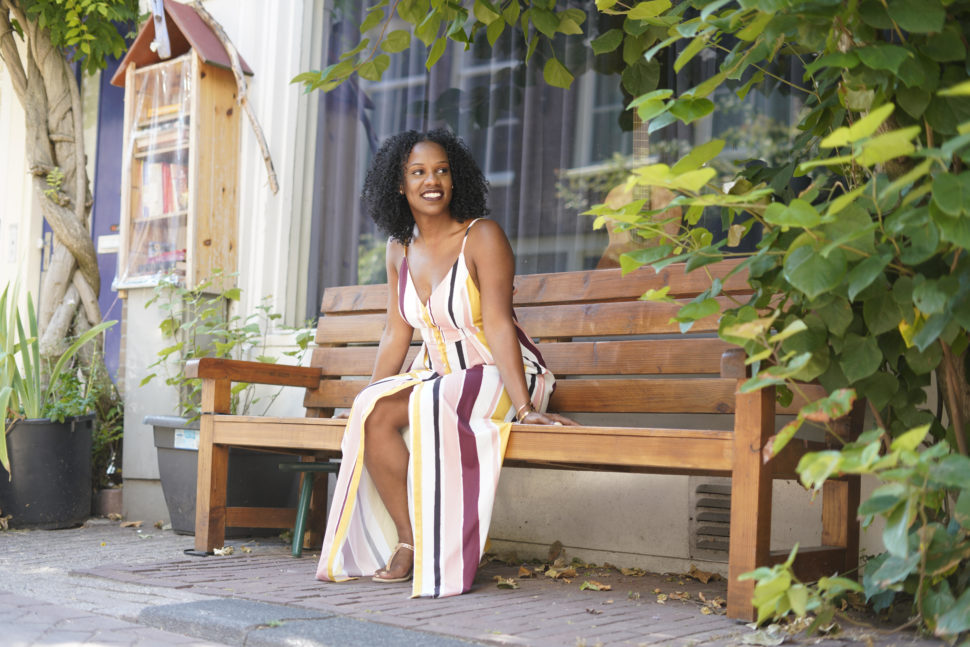 Travel Noire: What challenges have you faced as a Black woman living abroad?

Lené: My experience in the Netherlands has been interesting.  I think that as a black woman from North America, I have it a lot easier than black women from other regions.  I find that people treat me differently until I speak, and they hear my accent – which is a mix of Caribbean, British, and North American –  instantly I’m treated with a little more respect.

Living in Europe can also make you feel isolated in the sense that not a lot of people understand your culture and the way you grew up as a black person. Generally, I found that black women share a lot of the same experiences of wanting to participate in global culture while still holding on to their need for connecting to others like us. This is one of the reasons we created Amsterdam Black Women – a community of black women that get together for support, motivation, and fellowship. Travel Noire: How has living abroad changed you for the better?

Lené: Professionally, it’s allowed me to understand how to work with different cultures, and given me the opportunity to excel in ways that would not be possible in my home country.

Personally, living abroad can put you in some situations that you’d never have to deal with living at home.  It forces you to adapt to change rather quickly.  But I’ve been doing it for so long that now, I’m actually comfortable with being uncomfortable.  I’ve also had the opportunity to meet so many amazing people from all over the world, including the love of my life.

Related: The Black Expat: ‘I Left Brooklyn For Nigeria And Never Looked Back.’

Travel Noire: Do you have plans to move back home?

Lené: I honestly don’t know.  I’ve thought about it, and I always want to keep this option open. For the moment, I’m enjoying seeing what it’s like to live in other places. Travel Noire: What advice do you have for our readers seriously considering living abroad, but feel “stuck?”

Lené: Write down your “WHY” – Why do you want to move abroad in the first place?  Make a plan of action and stick to it.  Reach out to someone who has done it before and can inspire you.  I can also be reached to consult you and help you turn your dream of moving abroad into a reality.

Travel Noire: Where can you be reached on Social Media?

Lené: I can be reached at lennyxxo on Instagram.