Strollin’ With The Homies: The Dad Gang & Their New Standard of Black Fatherhood

Three years ago, Sean Williams was in the grocery store in his predominately white neighborhood in Long Island, shopping with his daughter, a regular activity for the two. It was during the heightened time of police brutality against black men and youth. He noticed he would receive more compliments and praise than his wife for “sticking around for the kid,” as if seeing an active black father was taboo. The arrogance of them to assume that most black fathers are absentee in the home, despite a prior CDC study showing black fathers as the most active parents amongst other races. The Brooklyn native and father of three was baffled by the responses, considering fatherhood was the one job he and his gang of dad friends took the most pride in.

The next day, Williams created the Dad Gang, challenging the narrative that black fathers are absent or rarely exist through imagery. He created an Instagram account reflective of other black men, debunking the world’s negative view of black fatherhood.

“The mission of the Dad Gang is to change the way the world views us,” he shares. “I knew it wasn’t just me so I started the Instagram to reflect other dads.”

The page has garnered nearly 2,500 positive images of black men embracing fatherhood since, and an abundance of submissions and questions from other black dads.

On June 9th, over 100 black dads accompanied by their little ones, strolled through Prospect Park wearing Dope Dad shirts for their Strollin’ With The Homies: 100 Black Dads Take NYC event for Father’s Day. They received mass amounts of cheer and praise from people watching a gang of black dads pushing their children in strollers.

“We’re urging black fathers to step into the light because you are dad goals. You don’t have to be perfect to consider ourselves goals,” says Williams.

Williams and his sisters were raised in Brooklyn by their Trinidadian parents. His father worked a lot to provide for their family, which meant sacrificing a close bond with him.

“He worked a lot so we weren’t the closest, and I always had a chip on my shoulder about that because I saw other dads on TV shows and how they were with their kids,” says Williams.

It was the gas that drove him to establish a deeper bond with his own children and now he calls them his best friends.

As a parent and as a Black man, Williams is fully aware of the negative stereotypes placed upon him and son. At a young age, Wiliams recalled his mom praying for him more than she prayed for his sisters because “as a black man he was a target and as a man, you have to take care of your family.”

Williams often thinks about the safety of his two-year-old son and future conversations they will about various topics such as interactions with the police.

“For my son, its a conversation I’ll have to have sooner rather than later,” he says. “I just saw they held a 10-year-old at gunpoint, so its really never too soon. As black men, we have to equip them for the world as soon as possible and educate them as much as possible.”

The future of the Dad Gang is solid and strong, branching out to other major cities, like Atlanta, Los Angeles, and more. Williams and the Dad Gang hope to feature more brunches, Dad Gang playdates, and Dope Dads Only Round Table Discussions to unpack and support one another through various topics and interactions regarding fatherhood. 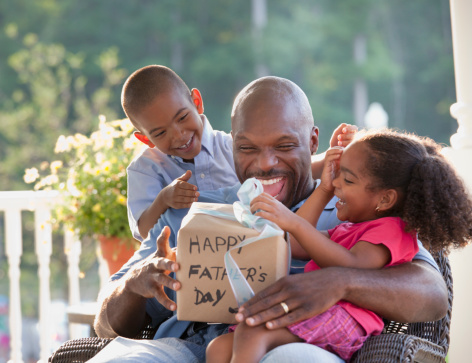 Father’s Day is a special occasion for dads to be showered with extra love and gifts. Most dads get a crafty handmade card from their children, a special tie or a new shirt. They might even get breakfast in bed at mom’s approval. Sure, they could buy these items themselves, but it’s extra sentimental coming […]