Scoot Flight Crew Member Gives Passenger Cup Of Ice Instead Of Water, Says ‘Wait For It To Melt’

Getting a complimentary cup of water on a flight is supposed to be a given, right? Not for Scoot Flight flyers.

Passenger Gene Goh was on a flight from Singapore to Osaka, Japan when the flight was suddenly delayed. While he waited, Goh asked a crew member for a cup of water. Water is the most common drink in the world, so he was shocked when the flight attendant said he would have to pay for it.

Goh said he would have been cool with having tap water, but after refusing to pay, he was instead greeted with something amusing. When the flight attendant came back, they brought Goh a cup of ice and told him to wait for it to melt. He made a Facebook post about the not-so-accommodating situation. 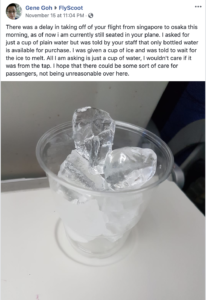 Flight attendants are really bold these days. While his post got some traffic with some supporting his decision, others were confused as to why Goh didn’t just pay for the water. Water should be free everywhere, especially on an aircraft where passengers suffer from dehydration, anxiety and other medical conditions. Airlines have been asking travelers to pay for other things that used to be a luxury. There is now a fee for items like headphones, a blanket and pillow and of course carry-on luggage.

Even though Goh asked for tap water, one flight attendant says that is the worst thing you can give to a passenger. According to a study done by the Environmental Protection Agency, one in every eight planes fails their standard water tests. Beverages like tea and coffee given on flights can be extremely hazardous. It also means planes aren’t as clean as they appear. If a passenger becomes sick from drinking their water, a lawsuit could present itself, causing major issues for the airline in question.