As a fellow “analogue girl in a digital world,” like Texas native, Erykah Badu, visiting Austin struck a chord with me since it’s a city that literally revolves around music boasting festivals eleven months out of the year. Last October, I flew out to Austin City Limits, aka ACL, and highly recommend a pilgrimage for fellow music lovers alike. Here’s why!

ACL has two separate weekends for concertgoers to choose from, with dates typically falling around Columbus Day. This is a huge bonus for crowd control and the line-ups for both weekends are synonymous with the exception of a few acts. Options allow for purchasing either: early bird specials, which are three-day passes issued prior to line-up announcements for $225, regular three-day passes at $250, or single day passes at $100 each. I chose the latter since my main focus was seeing Outkast, who kicked off the first night of the weekend I attended. I spent the rest of my time soaking up Austin, which translated to lots of vintage shopping and dining in South Congress (more affectionately known as SoCo). The great thing about ACL is the festival does not have to completely define your Austin experience, and you can choose to mix and match. CALIBER AND VARIETY OF MUSICIANS

You’re given access to more than a hundred acts over the course of three days performing across eight different stages. The music you experience, from veterans to up-and-comers, span different genres, including but not limited to rock, hip-hop and Top 40, all in a laid-back setting. I encourage checking out smaller stages earlier in the day to discover new talent and it’s best to prioritize the performers you’d prefer seeing for optimal viewing. My ACL highlights included energetic shows like Outkast, Childish Gambino, Jon Batiste and Stay Human, Jimmy Cliff, and Sam Smith. 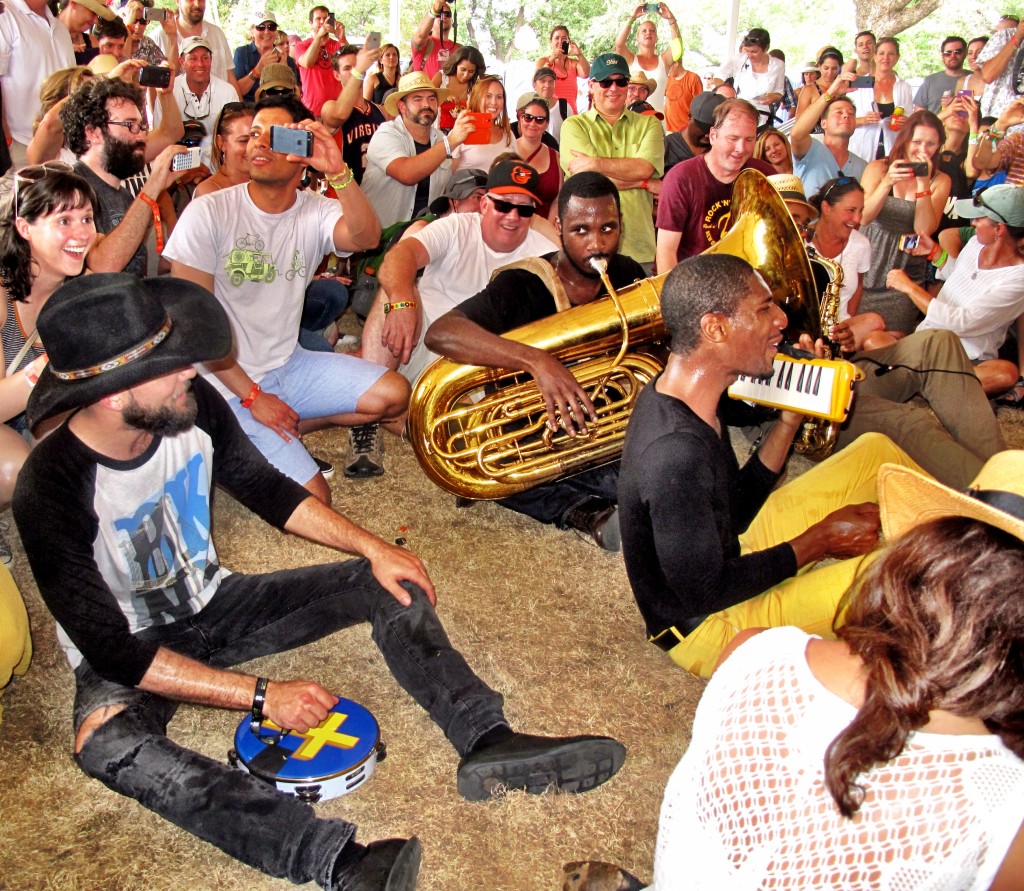 A major highlight of Day 1 Weekend 2 was when Jon Batiste and Stay Human jumped off stage for an impromptu jam session in the middle of the crowd!

An added bonus of Austin City Limits is that headline acts will typically perform small post-festival gigs at bars and venues around the city, like Childish Gambino did at Moody Theater right after his first weekend set at ACL last year.  These smaller show announcements are generally found on third-party websites like Front Gate Tickets. 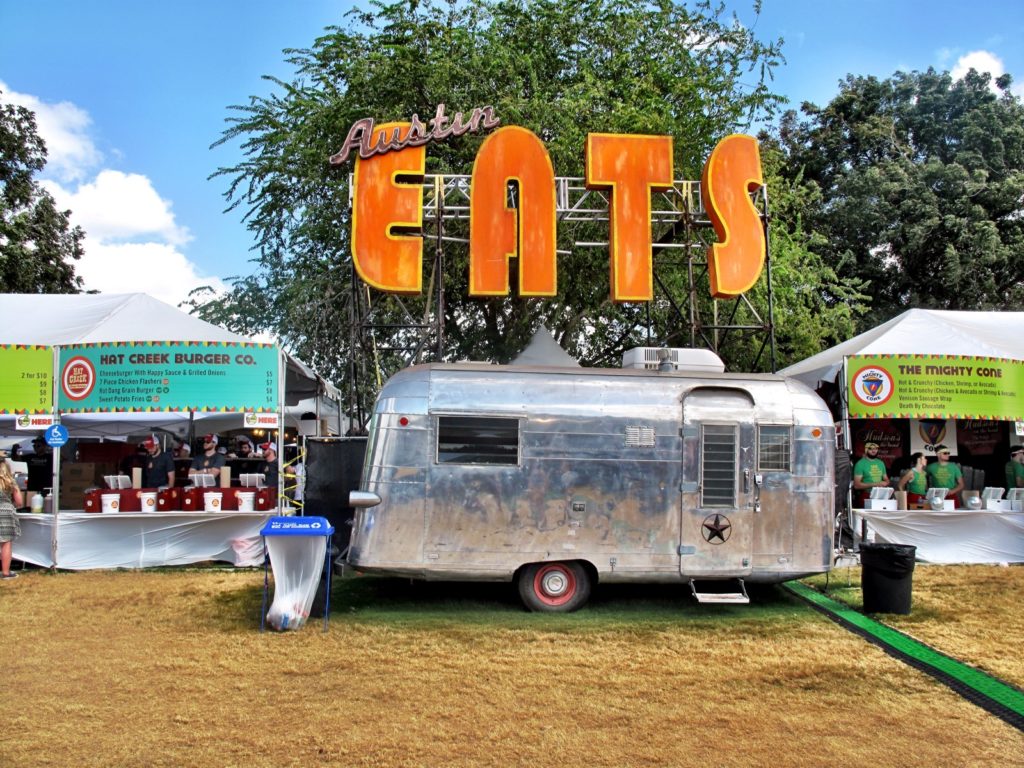 Outside of music, food is Austin’s other paramount. Prepare to pig out and be marveled by bold flavors at Austin Eats, where food trucks showcase some of the city’s best restaurants. Grabbing juicy ribs from The Salt Lick, delicious tacos from Torchy’s, and homemade ice cream from Amy’s are a must! There are also various vegetarian, vegan and gluten-free options that are “far from funnel cakes or turkey legs.” The Art Market is a great way to discover local vendors and artists selling clothing, paintings and other crafty items that make for unique souvenirs. One of my favorite stands was the Goui-Gui/Africabound tent, which displayed handcrafted goods from Senegal. In addition to the Art Market, there is also the iconic Waterloo Records to stock up on sounds you encounter while also potentially scoring an autograph from a featured band!

With the “free love” vibe that often conjures up scenes from iconic music festivals, Austin City Limits retroactively pays it forward by placing “a heart where its music strings live” via ACL Cares. About a dozen non-profit organizations, ranging from the arts to human rights initiatives, are stationed on festival grounds for anyone inclined to give back to their respective communities. In addition, concertgoers looking to volunteer directly on-site can aid with picking up trash and recyclable items. Volunteer efforts are rewarded with sweet karmic swag in the form of custom ACL T-shirts!

However, if you’ve got an altruistic heart but are just looking to kick back and watch the show there’s no judgement, because a portion of all ACL ticket sales are automatically donated to the Austin Parks Foundation, which helps to preserve Zilker Park.

Watering holes show games for fans taking a break from the festivities to check on their favorite teams’ stats. During my day at ACL, I saw lots of Baltimore Orioles and Kansas City Royals jerseys oscillating between stages and screens. The Yankee fan in me was not amused and it didn’t help that my best friend is an Orioles fan and proceeded to have me take pictures of her with fellow revelers. Wrong season, but BAH HUMBUG! You can make cashless checkouts with the ‘flick of a wrist’ through a preregistered bracelet connected to your credit card, therefore you don’t have to worry about carrying cash or keeping track of a chunky wallet. Once activated, secure purchases can be made at any stall with a personal pin code you enter for added measure. ACL wrist band with cashless access made a breeze of purchases!

With any awesome experience, there are always drawbacks. Two of ACL’s biggest letdowns, which aren’t unique to any other festival, are: bathrooms and parking. However parking won’t prove to be too much of an issue if you’re a bike rider. Austin is a bike lover’s city, and there are ample parking racks for bikers, as well as the option of hitching a pedicab if you’d rather reserve the peddling for someone else.

When embarking on your ACL pilgrimage, remember to: wear comfortable, closed toe shoes, dress lightly but carry something warm for nighttime, stay hydrated, wear sunscreen, bring a blanket to sprawl out between shows, and most importantly, have fun! For more information on this year’s lineup visit the ACL Festival website. Khadijat Oseni, aka KO, is an urban nomad and travel & lifestyle blogger from Brooklyn, New York with a healthy addiction to passport stamps, random creative adventures and culture. KO merges her flair for art, style, humor and pop culture along with her #jetsetterproblems to share her eclectic world experiences.