Singapore is the type of place where it’s not uncommon to stumble upon a Mosque, a Buddhist temple and a Hindu house of worship, all within one block. This varied cultural and religious presence is rooted in the city’s origins, going back to when the British colonized the city-state and established it as a flourishing port, attracting immigrants from China, Malaysia and India who flocked there for work. The influence of these three ethnic groups is evident in the very essence of Singapore, where a plethora of religious holidays are celebrated and where the diverse architecture, ranges from Chinese shophouse to colorful Indian rowhouse.

But where the cultural mashup really gets interesting is in the food. When Indians, Malays and Chinese immigrants arrived in Singapore, they began making their traditional foods but with local ingredients, giving some dishes their own uniquely Singaporean twist. What’s more, there was full-on crossover between the Chinese and Malay that created a cultural subset of its own called Peranakan. While each ethnic group has established neighborhoods in the city, i.e. Chinatown and Little India, hawker centers are where cultures collide, much to the palate’s delight.

Opened in the late ‘50s as a way to bring unhygienic street food vendors indoors where their preparation practices could be monitored, hawker centers are pleasant, open-air, food-court-like hubs found throughout the city, and they serve up a slew of cuisines. Indian curry stalls stand wedged between those offering Chinese noodles and traditional Malaysian fare. You can simply head to a hawker center to literally dip into a melting pot of cuisines, all under one roof.

Armed with a SMRT metro card and a budget of about $3 for a dish, I did a hawker center hop on my recent trip to Singapore. It was a delicious way to experience different neighborhoods while savoring a taste of four distinct cultures. Follow my moves below!

Hop on the East West Line and get off at Tiong Bahru. It’s a charming art deco neighborhood with a collection of cool shops to get lost in after your meal. Ask anyone where the Tiong Bahru hawker center is; it’ll be hard to miss, standing tall and shaded by palm trees. If you tilt your head just so, you’ll think you’re on South Beach. Like hawker centers across the city, Tiong Bahru’s has cuisines from all of Singapore’s ethnic groups, but the Chinese food here was untouchable and like nothing I’ve ever tasted.

Named for their preparation in bamboo steamers, these little, colorful bites, originally from Shanghai mean “little basket dumpling.” To prepare, the dumplings are filled with aspic, a meat stock gelatin, and pork, seafood or vegetables. Once steamed, the aspic melts, the result is a soup-like consistency tucked perfectly in a puff of heaven. Grab a sampling tray from the Extreme Xaio Long Bao stand. It’ll come with two pork, two cheese and two egg-filled dumplings, traditionally served up in a bamboo steamer. 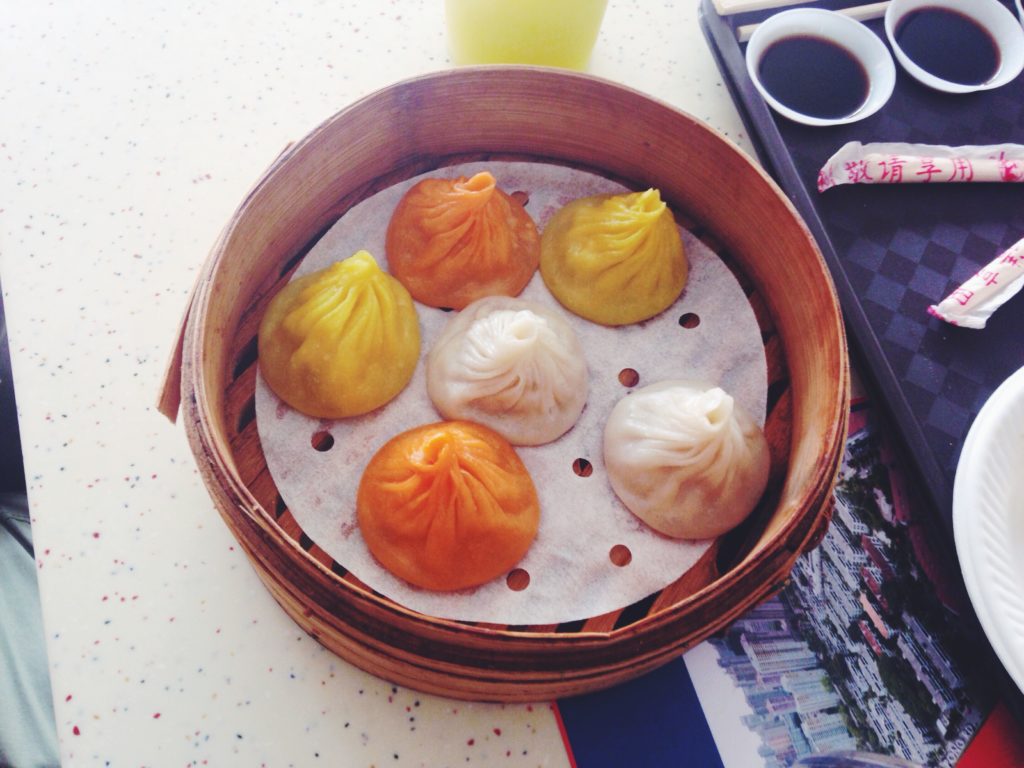 Originating in southern China, where it’s served as a rice noodle roll filled with shrimp, pork, beef or vegetables topped with soy sauce, in Singapore, Chee Cheong Fun has been modified and is served for breakfast, sans stuffing, and topped instead with a thick, sweet and salty hoisin sauce, sesame seeds, onion oil and chili. It’s straightforward, but the balance of flavors make it a must-try. 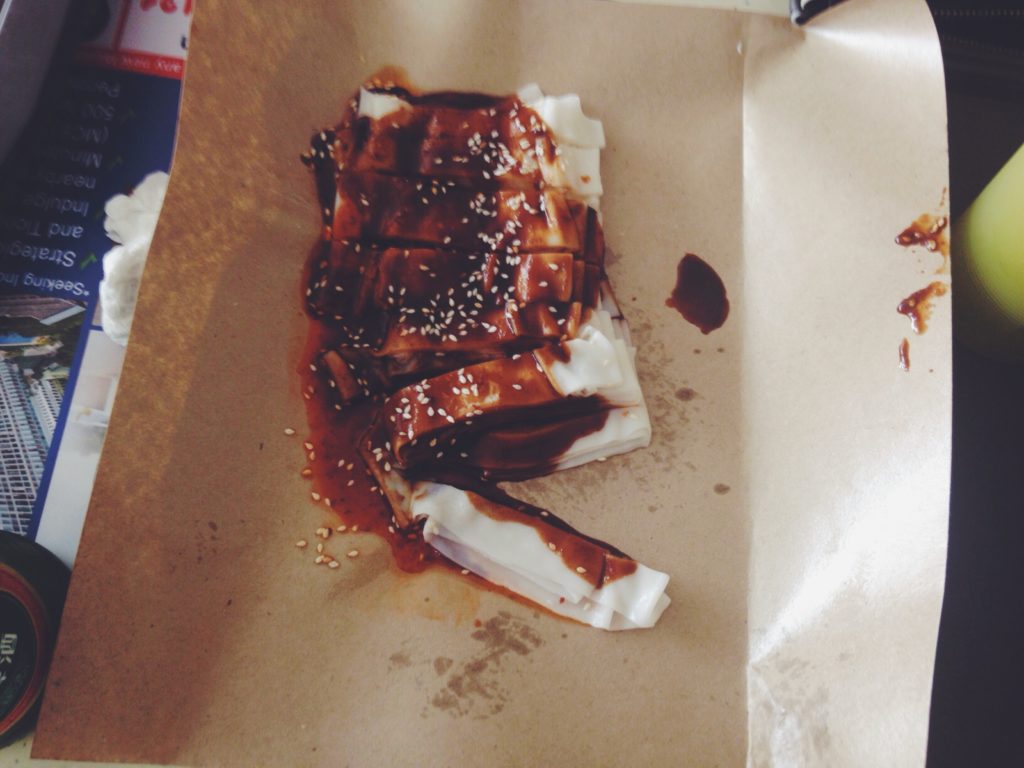 Tip: Make sure to pick up a bottle of Tsingtao, the popular Chinese pilsner, to complement the taste.

Take the Northeast line and get off at Little India. Visually, the neighborhood itself will excite the senses. As you head to Little India’s hawker center, Tekka Centre, notice winding streets and quaint buildings painted bright hues of purple, yellow and blue. Peruse the streets for authentic Indian and Bangladeshi fabrics and garb, and smell the fresh herbs and flowers sold by street vendors.

Get started with a few fluffy pieces of naan from the Ar-Rahman Royal Praya stand. Next door is a drink stand serving up fresh juices and teas in a variety of flavors. Go for the iced ginger tea. It’s spicy and creamy and pairs perfectly with the naan. 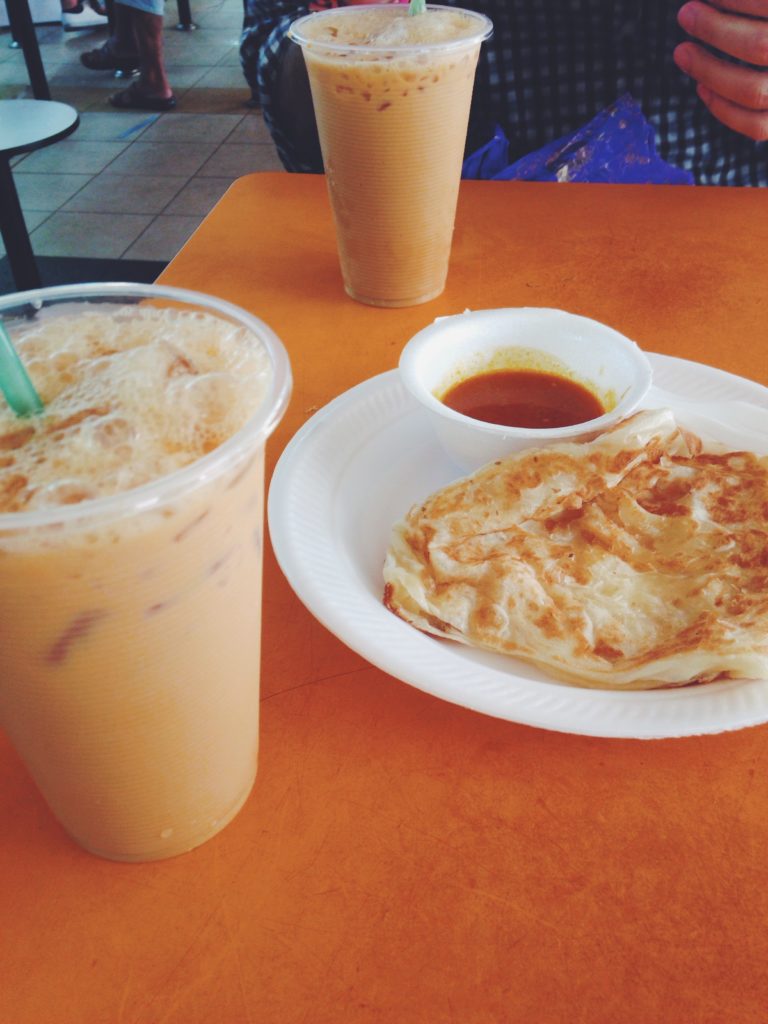 Stateside, chances are a meal had at an Indian restaurant will be from the northern region, which means your standard chicken tikkas and samosas. But Singapore’s southern Indian population makes for a varied, multi-regional approach to the cuisine. In southern India, idlis and vadas are staple snacks. Made from fermented lentils and rice batter, idlis are thick, porous cakes perfect for soaking up sauces. Dense and delicious, Vadas are reminiscent of a savory old-fashioned doughnut, but instead of flour, they’re made from a mix of lentils, potatoes and onions. Go to the S.P. Villas stand, order two of each with a splash of vegetable curry on top, and dig in. Take the SMRT to Outram Park and walk the few short blocks to Chinatown. It’s a cheery, colorful area; its busy streets packed with people, restaurants, antique vendors and sprawling holistic Chinese medicine shops. In Chinatown, you’ll find the Maxwell hawker center, a local favorite famed for Anthony Bourdain’s visit in 2011. It’s not a surprise Maxwell has quite a selection of tasty eats. Around noon it’ll be hard to find a table, but the bustle of the lunch rush only adds to the experience. Secure a spot with a group of other diners and load up on your goods.

These spring rolls have their roots in China’s Fujian province but have since stretched to Taiwan, Indonesia, the Philippines, Thailand and Malaysia, where unique variations have been introduced. The general rule of thumb, though, is to start with a fresh, crepe-like popiah skin made from wheat flour. Inside, a mix of finely chopped and steamed turnip, jicama, bean sprouts, carrots and lettuce leaves are added alongside boiled eggs and dried shrimp. Head to the stand with the large “Chinatown Popiah” sign and watch as the skilled vendor rolls popiah with precision, adding a bit of chili and hoisin sauce to each roll. I could eat these all day. 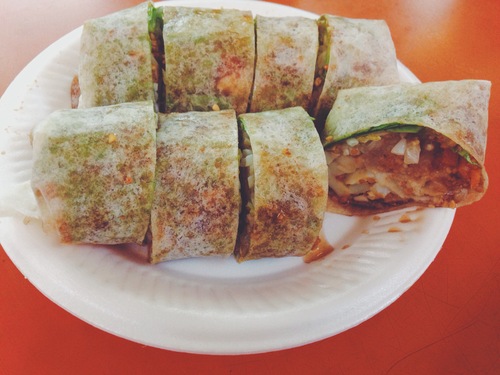 (Packed with local ingredients, Popiah are fresh and adductive)

Directly next to the popiah stand, you’ll find rojack. In Malay, Rojak means mixture, and in recent years, it has been adopted as a colloquial expression for an “eclectic mix,” hinting at the multi-ethnic character of Malaysian and Singaporean society. This sweet and savory dish with its mass of ingredients and toppings surely lives up to its name. To prepare, cucumber, pineapple, bean sprouts and deep-fried tofu are tossed with shrimp paste, tamarind, sugar, chili and lime juice. You’ll get a plate of it heavily dusted with ground peanuts. Use the provided skewers to taste the way each fruit and vegetable individually blends with the flavors. Uniquely delicious. 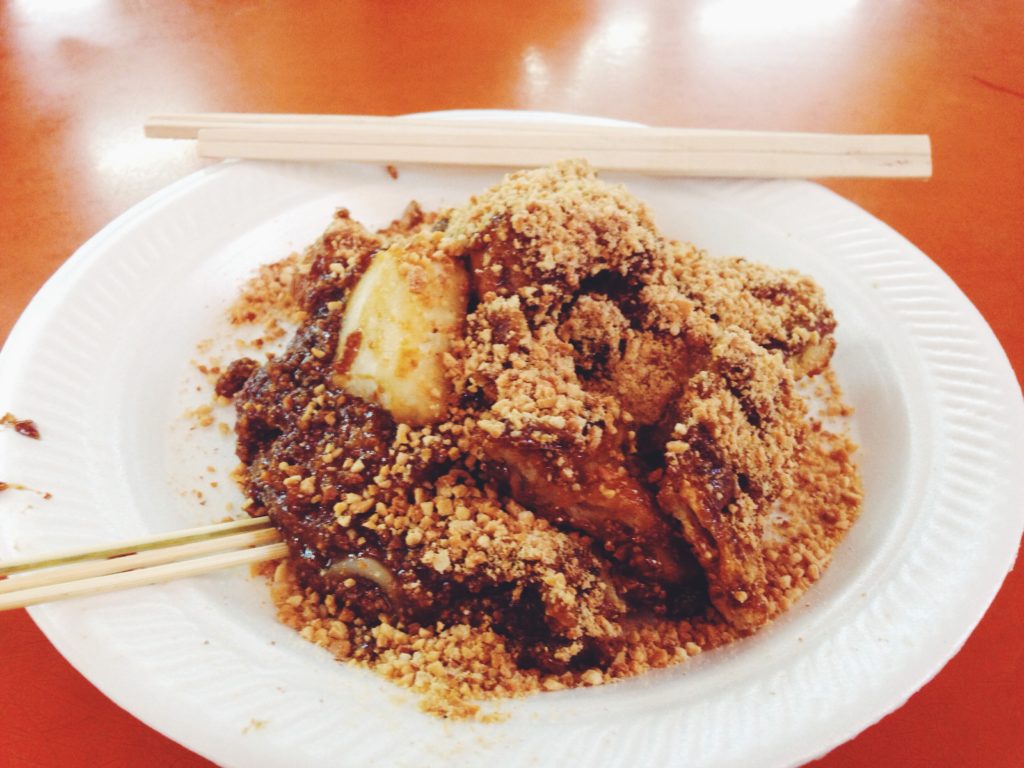 Peranakan culture has its origins in Malaccca, the Malaysian state where groups of Chinese immigrants settled and began adopting aspects of the local culture in the 15th and 16th century. Their descendants went on to develop their own language, Baba Malay, a mix of Malay and Hokkien Chinese, their own eclectic East-meets-West style of architecture and elaborate fashions using detailed embroidery and fine fabrics. Across the city, especially on the trendy Emerald Hill, you’ll notice ornate, ginger-bread homes with painstakingly detailed tiles and distinct Chinese twists, like large Mandarin characters anchored above doorways. It’s a clear blend, with a grounding in Chinese culture. Peranakan food, too, is a reflection. Dishes like chap chi (stewed vegetables) and babi pongteh (braised pork with fermented soya beans) are traditional Chinese dishes but are offered up by Peranakans as offerings for their ancestors. And then there’s rempah, a traditional spice mixture of Malaysian ingredients like turmeric, lemongrass, tamarind and lime leaves that serve as the base for most Peranakan dishes. Of the many ethnic groups represented in Singapore, Peranakan is perhaps the most fascinating, as it truly speaks to the city’s cultural crossover.

At hawker centers across the city you’ll find that Peranakan culture and cuisine are ever-present. Hanging at the front of food stalls you may notice triangular dumplings wrapped in bamboo leaves. Dubbed “nyonya” after the Baba Malay term for “woman,” these dense dumplings are made of glutinous rice and often filled with pork belly, then boiled or steamed. The sticky rice and meat combo makes for a unique blend of sweet and savory. 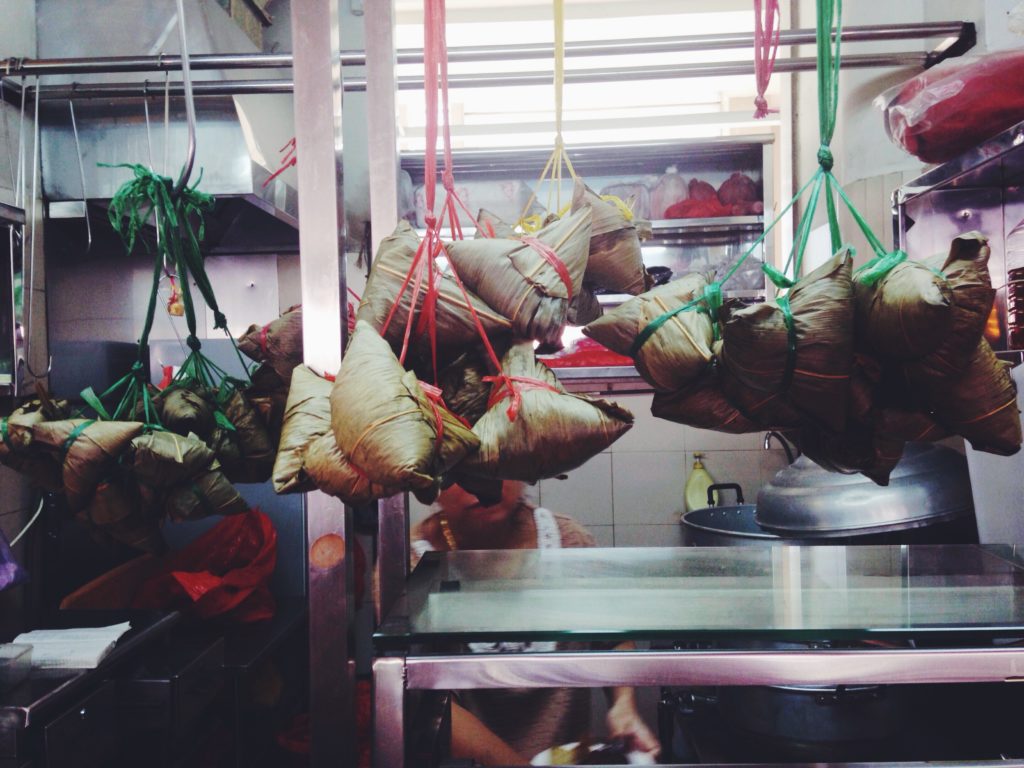 (Nonya dumplings on display at a hawker stand)

In addition to sampling Peranakan cuisine at hawker centers, you can try traditional Peranakan dishes as well as new takes on favorite staples at restaurants across the city. These three Peranakan eateries suggested by CNN Travel  are worth exploring if you really want to delve more into this unique cuisine.

Reservations are a must at this popular spot opened by Emily Goh, a self-taught cook with Peranankan lineage. Try dishes like ngoh hinge (five spice meat roll) and bakwan kepiting (pork and crab meatball soup), all made from family recipes.

Head here for Peranakan with a modern twist. The restaurant, operated by the city’s youngest Straits Chinese chef, is known for its sous-vide beef short rib served with a rich buah keluak (indonesian black nut) glaze.

Glynn Pogue is a writer and dreamer from Brooklyn, NY. Following her graduation from Howard University last year, she ditched corporate opportunities in favor of adventure, and signed up for the Peace Corps. Glynn is now serving her 27-month commitment in Cambodia, where she eats fried tarantulas, bargains in the market like a pro and teaches English and fine arts to high schoolers. In her down time, she jets off to exotic Southeast Asian locales on cheap flights, crowded buses and overnight trains. An unapologetic wanderluster, she draws inspiration from the people she meets in her travels; their foods, languages, personal styles and stories. Follow her journey on instagram at @yungvogue.