A new report out of France suggests that African treasures in the Quai Branly Museum should be returned as soon as possible.

In the movie Black Panther, Erik Killmonger, played by heartthrob Michael B. Jordan, briefly touched on the fact that many artifacts were stolen from our ancestors to be exhibited in museums such as Quai. Over 70,000 objects from sub-Saharan Africa are showcased including statues from Benin and delicate paintings that were once housed in Ethiopian churches. This report, directed by France’s President Emmanuel Macron, was spearheaded by two academics: French art historian and college professor Bénédicte Savoy and economist at Gaston Berger University in Senegal, Felwine Sarr.

Savoy and Sarr suggest that the artifacts were removed from Africa and sent to France without the countries consent. If the African countries asks for them, they should be returned.  Over the next five years, the concept is meant to be adapted to a collaborative process of information gathering, research, scientific exchange, and training. Like most reports, the findings could cause grave damage to the museum industry. Almost 95 percent of African cultural heritage is being showcased in major museums worldwide. Outside of the known objects in Quai Branly Museum, there are an estimated 20,000 more in other French cities like Cherbourg, Le Havre, Lyon, and Grenoble. “There is no question, either for us or for our African counterparts, of emptying French or European museums to fill up African ones,” Savoy said. “This is obviously not a case of transferring back the 70,000 objects from sub-Saharan Africa that are today in the collections of the Quai Branly Museum and that arrived in France over a period of 150 years.” 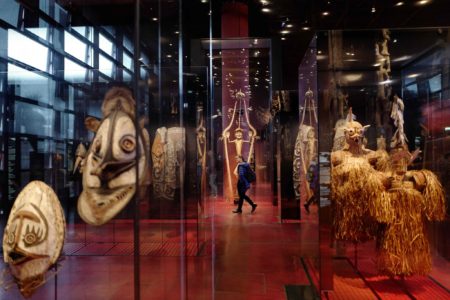 Savoy says the idea is to get the geography of African heritage back on track, starting with returning all artifacts that were taken during the French colonial period in Africa. Dating back to the late 19th century, the report suggests that “any objects taken by force or presumed to be acquired through inequitable conditions.” With the report due to President Macron on Friday, it’s already gaining some traffic in publications like Le Point. The headline read “African artworks: A report recommends giving everything back (or just about)!” with leaked excerpts throughout the article.

While the magazine suggested the report won’t have an impact on Quai Branly Museum, other museums in Europe are feeling the pressure. The British Museum in London reportedly has 700 objects from the Kingdom of Benin, now part of Nigeria. The new Humboldt Forum in Berlin was hoping to showcase hundreds of sculptures called the Benin Bronzes from the kingdom.

Macron first raised the issue back in November 2017 while speaking at a university in Ouagadougou. “I cannot accept that a large part of the cultural heritage of several African countries should be in France,” Macron said. “Africa’s heritage must be showcased in Paris, but also in Dakar, in Lagos, in Cotonou. This will be one of my priorities. Starting today, and in the next five years, I want to see the conditions put in place so as to allow for the temporary or definitive restitution of African cultural heritage to Africa.” Although the President was met with cheers and claps, spectators question how far he will go to put the suggestions into play, as earlier this year, he tore up some proposals to help the economic conditions in suburban areas. Marie-Emmanuelle Pommerolle, an Africa enthusiast and college lecturer said Macron’s campaign for this type of restitution is typical in his foreign and domestic policy approach. She cautioned that pulling this off will need to be in the hands of museums and not politicians. Sarr and Savoy traveled to Mali, Senegal, Benin, and Cameroon, meeting with officials, museum directors, and art specialists before writing the report. Unlike Macron’s declaration, Sarr says if the objects are returned, it will be a permanent move. “We’re proposing a framework that takes into account the time constraints of the requesting nations,” Sarr said. “So that we’re not imposing a vast quantity of restituted objects on them, and are making sure that they actually want restitution, are prepared for it and are in a position to organize it.” Broken up in phases, phase one will consist of moving symbolic pieces like statues, palace doors, and thrones stolen by the French in 1892. Phase two, happening next spring through late 2022, teams will judge the importance of certain works in order to return them.

The last phase is open-ended. African states that have not put in restitution requests claims will still be able to. The report says there won’t be a deadline, not wanting to “give the impression that the historical window which opened during the speech at Ouagadougou in 2017 is at risk of shutting again anytime soon.”