Every time we log into Instagram or Facebook, we can usually count on another lavish engagement photoshoot popping up on the timeline. Whatever happened to a simple selfie and congratulations? Those days are over. While the photos are pretty and can be unique, there’s always that one couple that takes it too far.

Meet American travel photographer John Milton. Back in 2017, he and his wife decided to take some ‘tasteful’ wedding pictures on top of an active volcano in the African country of the Democratic Republic of the Congo. While it sounds groundbreaking, there were a few extras in the picture that were the exact opposite. In the now viral photo, Milton and his wife are being held at gunpoint by African soldiers. In another photo, his wife, who is not named, is seen posing in the ‘ghetto’ of Congo in a wedding dress and a wedding ring on top of an AK-47 as ‘Blood diamonds.’ 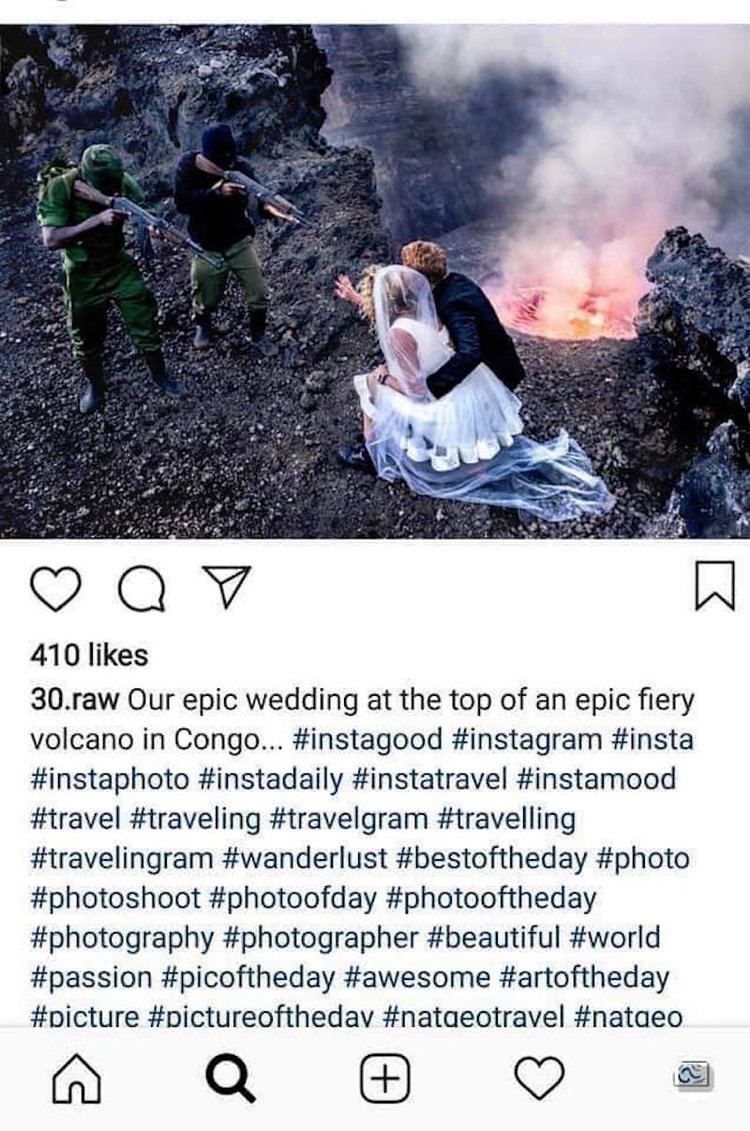 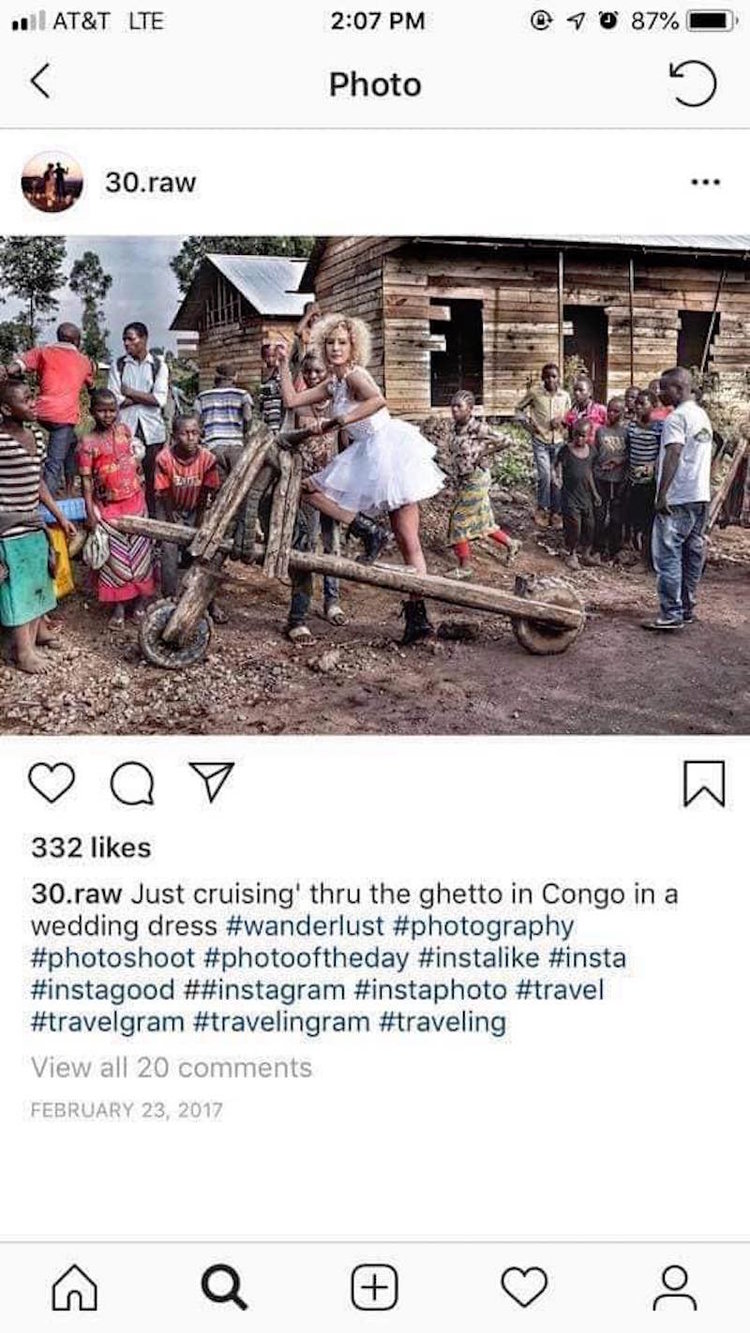 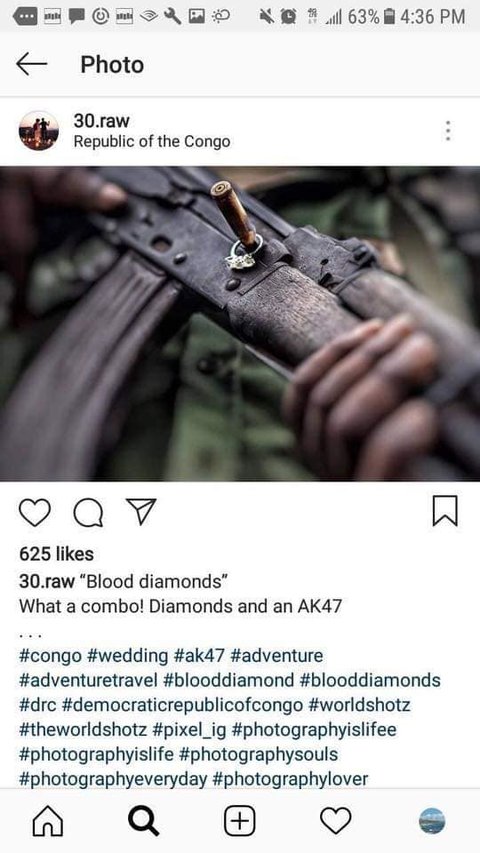 It caught the eye of 28-year-old ESL teacher, Cecilia Christin, who made sure she got a screenshot of the images, posting them to Facebook saying there are “literally too many things wrong” with the photos. Although she doesn’t know the couple personally, Christin found the post on her Instagram Discover page because she runs a travel-themed Instagram. “I decided to share these pictures in order to foster discussion within my friends and following, specifically about the accessorization [sic] of black bodies for this couple’s photo shoot,” Christin said. She said took issue with how the couple uses “black and brown people and their experiences as props to gain a following” on Instagram.

The posts were accompanied by hashtags like “wanderlust,” “awesomepix,” “instagood,” and “beautiful,” among others.

While one Instagram commenter was curious about how the couple came up with the “out of the box” poses, many commenters were extremely offended by the photos and called for Milton to take them down.

Since going viral, Milton’s popular Instagram page, which once had 11,000 followers, is now private. The pictures also appear on a photography blog by Steve Huff in a June 2017 guest post by Milton titled “Outside of the Box Congo Wedding Shoot with the Leica M10.” Milton hasn’t been afraid to embrace his controversial work nature. In a 2016 interview with fellow photographer Eric Kim, Milton says “I would describe my style as ‘raw and in your face,'” he said. “I like to stir the pot and push the envelope. My travel habits and photographic style clearly show that.”

If this isn’t controversial enough, these weren’t the only wedding stories to go viral this year. Earlier this year, people were confused when a bride didn’t understand why her African-American friend didn’t want to attend her wedding which was held at a plantation. To make matters worse, the bride also pranked her bridesmaid by asking her to wear a yellow $188 ‘monstrosity.’ Forbes Reveals The Most Dangerous Places To Visit In 2020

Travel always comes with a level of uncertainty, but Forbes recently announced the most dangerous places to visit in 2020 based on research done by International SOS, a medical and travel security risk services company. The company makes its predictions using five categories of risk: insignificant, low, medium, high, and extreme. According to International SOS, […] In the Black Panther film, there were a few heartfelt moments from the villain Killmonger, played by actor Michael B. Jordan.  One of those moments was when the audience was introduced to him as a black visitor to a fictional British museum. He confronts the white museum curator about African artifacts in the museum by asking, […] According to the United Nations refugee agency, the Congolese people are fleeing the country’s violence at a “massive scale.” This violence stems from a resurgence of ethnic clashes between the farming and herding communities. Since the beginning of June, more than 300,000 have fled the northeastern Democratic Republic of Congo. During the past week, there […]