Jeremy James is a 23-year old pilot from Miami, Florida. He recently flew his first airline flight with his parents on-board to support his accomplishment. He tweeted about his excitement and the hilarious reaction his father had after landing.

Flew my first flight as an Airline Pilot today!👨🏾‍✈️I also had the pleasure of flying my parents for the first time, My dad never wanted to fly with me until I flew a jet and the first thing he says to me once I get out the plane is “my back hurts” 😂 we didn’t even land that hard pic.twitter.com/rDT78L6paU

We spoke with Jeremy about his life as a new airline pilot. Here’s what he said:

Travel Noire: When did you realize you wanted to be a pilot?

Jeremy: I knew I wanted to be a pilot since I was little. My parents told me I was always fascinated with planes since I was young.

TN: What was the training like to become a pilot?

Jeremy: The training was long for sure. I went to a great flight school in Georgia, called Middle Georgia State University where they have a 141 flight program. I was able to get all my flight ratings and my Bachelors degree in Aviation Science and Management.  I worked with the school’s ASA flight instructor to build the necessary flight experience to be qualified as an airline pilot. It took me a little over four and a half years to go from zero experience to a full-fledged airline pilot.

The biggest factor during the training was definitely the cost. Flight training isn’t cheap by any means. Thanks to the help of my wonderful parents, whenever I needed some extra money for my training, without hesitation, they gave it to me. I needed to take some loans out as well. But with anything you do in life, once you have a passion for it doesn’t seem that hard to do.  It didn’t feel like training back then, and it doesn’t feel like work now. 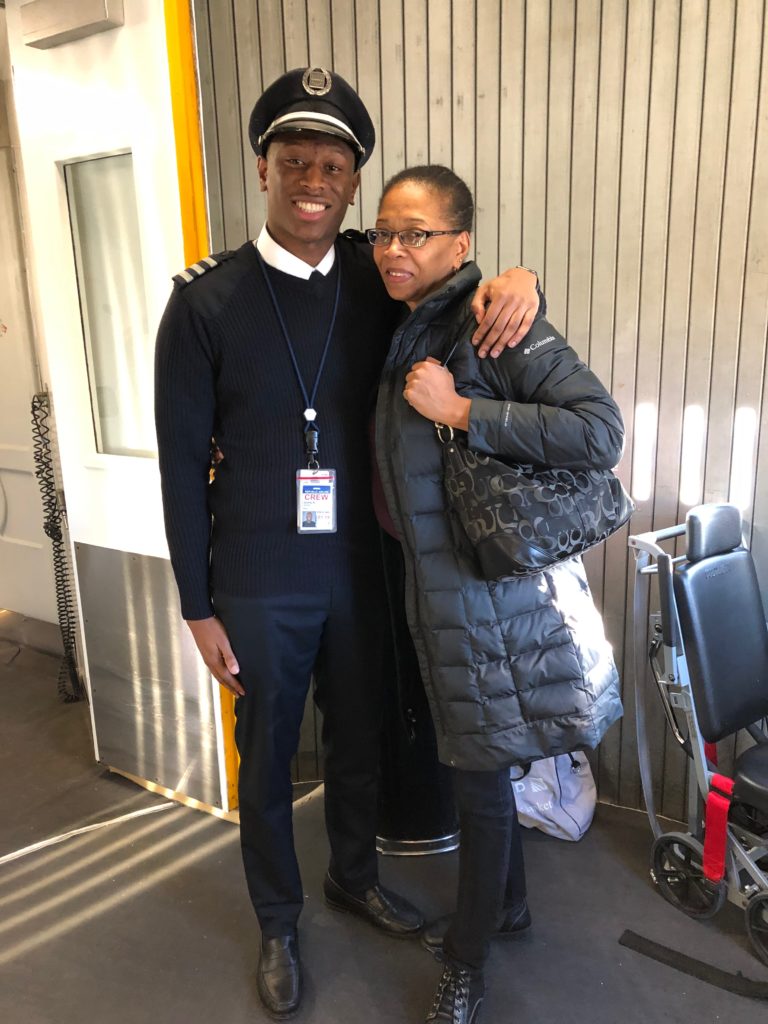 TN: When did you take your first flight? Walk us through your emotions that day.

Jeremy: The first flight I ever did was back in 2010. I had just turned 15, and my uncle bought me a discovery flight in a Cessna 172, out of Republic Airport in Farmingdale, New York. My emotions that day were a mix of being excited and nervous for my first flight. However, once I took off and got to see the world from a different perspective I was hooked immediately. The views never get old, and I still appreciate watching the sunset and sunrise from the plane.

TN: How did you convince your parents to fly with you on your first airline flights?

Jeremy: I never had to “convince” my parents to come on my first airline flight. They knew how hard I worked for this, and always told me that when I do my first flight as an airline pilot, they would be there. It was only a matter of where and when it was going to be. As you can see, they kept their word! I could tell my mom was proud by the look on her face. I was expecting my dad to say how proud he was, but instead, he proceeds to tell me that his back hurts. I knew we didn’t land that hard and I saw the smile on his face, so I knew he was joking. He was very proud of me as well. TN: What does it mean to you to be a Black pilot?

Jeremy:  It means a lot to be a Black pilot. There is not a lot of diversity in this field. I feel it is important to show that no matter your race, ethnicity, or gender you can achieve whatever you put your mind to as long as you’re willing to put in the work to achieve your goal.

TN: Where can we follow more of your journey?