Phuket || The Land of Smiles

Beautiful doesn’t quite do it justice. I wonder if there are any words to adequately describe Phuket, Thailand (pronounced pu-ket). Paradise, perhaps?

Located in the Andaman Sea of southern Thailand, Phuket’s name, according to some sources, is said to be derived from two Thai words, phu (mountain) and ket (jewel). Seeing this beautiful mountain jewel was well worth the 23 hours it took to get there. There are tons of airlines that fly regularly to Thailand, but the best deal I found was with Korean Air. They provided top-notch service, even in economy class.

In 2004, the Indian Ocean earthquake caused a devastating tsunami throughout much of southeast Asia. Phuket has since recovered and has experienced tremendous growth. However, one tour guide confided that because of so much development, the island’s natural beauty has diminished.  Admittedly, as a tourist I couldn’t relate, but was very respectful of his concerns. I was drawn in and mesmerized by the aqua blue water, white sand beaches, mountain views, delicious cuisine, and the warm friendly smiles of the Thai people.  Seven days was not nearly enough time to take it all in, but believe me I tried!

Let me say though, nothing can prepare you for the heat. The weather is very, very hot and you will sweat like there’s no tomorrow!! We were there in March, the “dry season”, when temperatures are “cooler” and sea conditions are good for swimming and diving. (March is also considered high season for tourism which officially ends in April.) If you do make the trip, be sure to pack light loose fitting clothes. You can research the best time of year to plan your trip by visiting sites such as The Phuket Holiday Guide which breaks down the pros and cons for each month of the year.

Knowing that many elephants suffer unfathomable abuse at the hands of their trainers simply to put on a good show for tourists, I wanted to be sure that any tour I booked did not contribute to this.

At the Siam Safari elephant camp we learned about the Mahouts, individuals who spend their entire lives living with and training the elephants. A mahout is paired with an baby elephant and trains them until the end of either of their lives.

In addition to the elephant ride we met two baby elephants, Poo Nok and H Choo, watched a rubber making demonstration (Thailand is the top rubber producing country in the world) and learned how to husk and separate rice.

It was around 100 degrees when we took this tour–in fact, I’m sweating just thinking about the heat that day.

We visited several islands via speedboat over the course of  9 hours. We snorkeled in Lho Sa Mah Bay and swam in Pi Leh Cove, which due to the high salt density, enables you to float very easily without a life jacket. The tour included a pass to Monkey Beach where we were able to get a few great pictures of the wild monkeys. The monkeys jumped onto the boat knowing that our tour guide would feed them fruit. After enjoying a buffet lunch, we lounged in chairs under the trees. Unexpectedly, we witnessed a “circle of life moment” where a small snake attempted to finish a frog for lunch. YIKES!!

The highlight of this tour was the stop at Phi Phi National Park, the site where the Leonardo DiCaprio movie “The Beach” was filmed. Apparently the production company paid the Royal Thai government upwards of $2 million dollars for exclusive access for several weeks.The island was simply breathtaking. The beach was encapsulated by two mountains, or cliffs, as if they were standing guard over the island. There I saw trees with enormous, intricate root systems that rested above ground.

I marveled at how lucky I was to be there but was incredibly overwhelmed by the sheer amount of tourists crowding the beach. It was such a catch 22–wanting to see the beauty of nature but avoiding being trampled by moseying tourists.

Cooking Class and The Fresh Market

Hello. My name is Tammie and I love eat! Although I am a self proclaimed foodie, I also love to cook and jumped at the opportunity to take a cooking class offered at the Marriott Vacation Club.

As a part of the class, the chef took us to the fresh market where local Thai shop for fresh fruit, vegetables, poultry, and seafood. All produce at this open air market was picked earlier that morning, fish and other seafood caught the night before, and the beef and pork slaughtered in the wee hours of the morning. While it was only 10:00 am , it was extremely hot  and the aromas of the market started to get the best of me. Not wanting to insult the merchants, I resisted every urge to cover my nose or make any outward gesture to indicate my discomfort, unlike a few other people in the class.

The chef guided us through the market identifying many of the ingredients used in Thai cuisine: kaffir lime, basil, galangal, turmeric, ginger, coriander, and lemon grass to name a few. There was an array of curry powders, oyster and fish sauces. At one point the chef held up a vegetable and asked if we knew the name. Although the western term is okra, the Thai refer to them as “lady fingers” because they resemble the fingers of traditional Thai dancers.

Near the very end of the fresh market tour, I had a surreal experience. Surreal only because it was so unexpected. Several Thai merchants were staring & pointing at me, talking and giggling with one another. I politely smiled but wasn’t sure what to make of it when one of the ladies said something to the chef in Thai. He turned to me smiling, but somewhat irritated, and relayed to me they thought my skin was beautiful. I looked at them, smiled, and holding my hands together as if I were praying, gave my head a slight nod and said “Koop kun ka“, which means thank you in Thai.

Later it occurred to me that maybe they’d never seen a Black woman before and we might’ve been the first. While I did see a few black men, 2 to be exact, I saw no women of color.

Back at our hotel, the chef walked us through several recipes that once finished, were divine. We cooked Tom Yum Soup, Gai Pad Kha (Siamese Ginger Chicken, and Yum Nue Yang (Grilled Beef Salad). 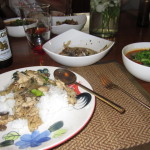 As I stated previously, seven days was not enough time to fully take in all that Phuket had to offer. Phuket is a beautiful paradise and the Thai people welcome you with warm hearts and big smiles. If you visit however, you won’t want to leave. Once you do leave, you will begin plotting your return on the flight home.

Be sure to say Sa watdee ka (hello) for me.

A Technical Writer by day and personal blogger by night. Idealistic, sensitive, big-hearted, with an open mind who gravitates to the brainiac oddballs, nerds, and underdogs of the world. Behind the megawatt smiles and shy facade is an avid reader with a wicked sense of humor, although mostly self-deprecating, and razor sharp wit. An advocate of self improvement, truth, and growth with a passion for travel, books, music, photography, food, family, friends, and of course, writing. Most Beautiful Airbnbs In Phuket, Thailand

It’s no wonder why Phuket was named the 6th best destination for 2019 by TripAdvisor when it is home to some of the most picturesque beaches in the world. And with something to suit every taste and budget, this lush, mountainous island draws tourists from all over the world to experience its magic. Here are […] 53 Countries Later: This Couple Has Advice For Travel Baes

Even with their busy schedules, Daquan and Jamar make traveling together with each other a priority in their marriage. Daquan is the CEO of Dynasty Spirit Elite All Stars, a successful all-star cheerleading and dance program in Philadelphia, and Jamar is the founder of Urban Gent Entertainment, hosting events around the city. Related Post: The […] Solo travel can be rewarding in many ways. Without the pull of other’s agendas, interests, and travel worries, you are left with much more time for self-reflection, growth, and personal exploration. For many women, solo travel also offers a sense of empowerment. You are your own travel guide, safety net, and voice of reason. You […]