Recently I was called to New Orleans for a last minute trip. As many of you know, New Orleans has a rich history of architecture, culture, and cuisine – specifically of the French Creole persuasion. The Creoles of Louisiana, who are of French, Spanish, African American, and occasionally Native American descent, have specifically created  a specialize cuisine ranging from distinct African and Caribbean influences, as well as spins on a variety of French and Spanish dishes. Not to be confused with Cajun dishes, Creole cuisine specializes particularly in a Southern flair of main ingredients that include shrimp, rice, okra, grits, tomatoes, shellfish and a rich assortment of spices, creams, and bisques. 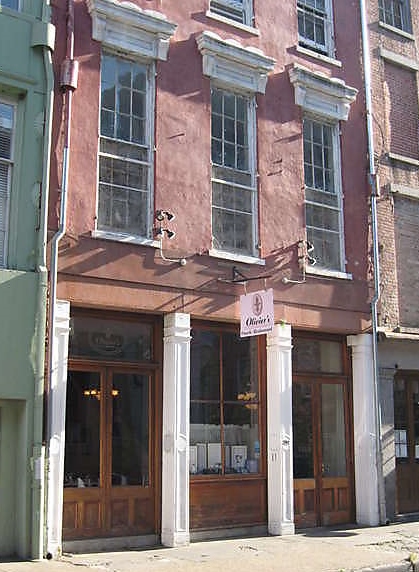 It was there in New Orleans that I ran across Oliver’s Creole Restaurant. Created by Armand Olivier, Jr. and family in 1970, the family continues the rich oral and food recipes created by the family matriarch, Gramma Gaudet, started several generations back. The restaurant, currently still owned an operated by the family remains a bright fixture on the New Orleans Creole dining scene.

Upon arriving at 204 Decatur Street in the French Quarter, my friend and I Lawrence were greeted with a quiet and casual atmosphere  that emanated the typical New Orleans flair. Shortly after arriving, we were almost immediately seated by manager, Mr.Doug Hunter, who though initially informed us of the hour-long wait, managed to find us dining near the rear of the restaurant. While Lawrence and I are hardly of the romantic variety, I will say that the low light setting does in a sorts set the mood.

Shortly after being seated, our waitress Gilda promptly presented herself with menus and the evening’s dishes. She informed us on her favorite choice platters and left us to make our decision.She later returned bringing us a small platter of honey cornbread drizzled in butter as we perused our menus.  I personally love Creole food, and looking at the menu found it hard to pick just one item to start with. Given that no one in my family makes gumbo, a seafood soup mixture particularly of spices, shrimp, crab legs, and rice, that was the first thing on my mind. Fortunately for us gumbo was a feature on the menu as an appetizer from which we chose the gumbo sampler.

The gumbo sampler consisted of 3 different versions of gumbo and each gumbo sample was presented in a small bowl all served on one dish. The waitress did not specify which version was nor did clarify the distinctions between the three, although they were all distinctly different in taste color and seasoning. As a result, Lawrence and I jokingly referred to the colors of the gumbos to indicate which ones we liked the best.  The gumbos were absolutely fascinating and I’d honestly be lying if I told you I could pick the best one. I couldn’t tell which was which!

At this point, it was time to take our orders. Did I want the mouth-watering Mama Cheryl’s Crawfish Étouffée, the spicy Great Grandma Jeanne’s Shrimp Creole, or a sumptuous Jambalaya & Fried Catfish dinner? How could I choose? There were so many wonderful options! I opted instead for the New Orleans Classic Trio consisting of a blackened fish filet, shrimp scampi and chicken andouille jambalaya, and crawfish etouffée. If you can’t have just one, why not all? Meanwhile, Lawrence chose the Creole Rabbit as his choice entrée. While we waited, we contributed the usual amount of small talk, people watched, reminisced about our college days, and played a few games. The wait wasn’t very long and before we knew it, Gilda was bringing our entrées.

Each dish was hot and neatly presented. Unfortunately for Lawrence and I, we had unwittingly decided to buy “hand grenades” on our way there so we weren’t able to finish our meals as we were pretty much full almost as soon as we started eating. I rather enjoyed the semi sampler that I had with the shrimp scampi and chicken andouille being my favorite of the three. I’m not sure if  I would have chosen the rabbit as Lawrence did, but I think I preferred my dish to his. As we were unable to finish our meals, we boxed them up to take with us. Gilda was kind enough to show us and treat us to a desert of peach cobbler which after sitting for a while we were ironically able to finish compared to our meals.

As mentioned previously, Oliver’s is a low-key fine dining experience as a perfect place to sit and have lively after dinner wine and drinks conversations and so we partook in our shard peach cobbler in this manner. Soon enough we realized that we among some of the last patrons and we took that as a sign to make our exit. My experience as Olivier’s was quite entertain and definitely one to be repeated upon return to New Orleans, a recommendation I highly suggest to any visiting patrons to New Orleans. I would caution some of the more budget minded patrons that while not overly expensive, this is an approachable tourist experience that should be experienced with the mind that this will be a true dining experience. However, in the mean time to satisfy future cravings for Creole dishes , I will just have to settle for the recipes in the official Oliver’s cookbook that I purchased before leaving.

Alicia is a frequent traveler who clearly loves to travel frequenting places such Germany, Japan, and Angola often in addition to a variety of destinations around the world. She is also an avid photographer who enjoys taking pictures of the places she goes and sharing them with the world.