Meet The Andersons: This Family Is Traveling The World To Track Their Lineage

Meet the Andersons: Ike (Dad), Natalee (Mom), Jasmine (12), Kaylee (11), and Layton (7). Ike and Natalee are from Jamaica but raised their children in West Palm Beach, Florida.

Related: Meet The Parents Who Decided To “World School” Their Daughters.

We had the chance to learn more about their unique journey and the impact it has had on their family. Travel Noire: What was the deciding factor to pack up and leave the States?

Ike: We wanted to give our children the experience of travel to foster their own unique view of the world, instead of just what we tell them or what they see on the television.

Two years ago, based on a DNA test and tracking our families’ lineage and history, we decided that this was something we wanted to explore. We also wanted to incorporate these six things: 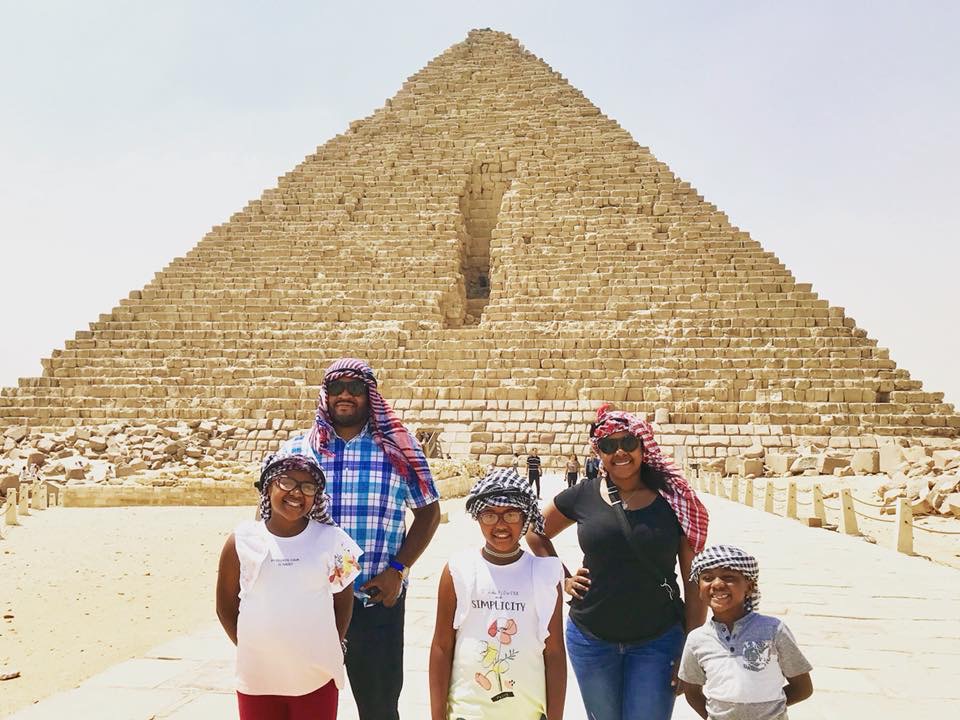 Travel Noire: Were your children homeschooled before the move?

Ike: Before the move, the children were enrolled in traditional schools. The younger two in elementary and our oldest was in middle school.

Travel Noire: How have the children adjusted to this new life? Positives? Negatives?

Ike: Once we decided this was the path we wanted to pursue, we began discussing the plan with the children along with what to expect or how their lives would change. We strongly believe this open dialogue made a world of difference in how well they adjusted. The children have adjusted in their own unique ways since they all have different personalities and coping mechanisms. They have all improved in being more aware of what is going on around them. One of the negatives, which we have since turned into a positive, is that we get many stares. This was especially difficult for our older daughter since she seems to pick up on peoples’ energies very easily. We have to be cognizant of this with her.

After some time of being away from the States, they missed simple things that are insignificant for us adults. They had to adjust to life without their favorite stores like Carvel, Target, Justice, and Chick-fil-a (Even though Grandma saved the day several times with surprise care packages).

Travel Noire: As parents of 3 young black children, what do you hope they will gain from living abroad versus in America?

Ike: We are a product of our environment, and in some cases, our perspectives and thoughts are based on such. With that, we wanted to give them different experiences and exposures to use as a tool in their toolbox of life.

We hope that they gain a deep-rooted value of self, a natural love for humans worldwide, and an unquenchable desire to dig deeper and seek answers for their questions, rather than accepting what they’re told. Travel Noire: What impact did living in Africa have on your kids? Was it eye-opening?

Ike: I think we can separate Africa into two parts:

Egypt – It was important for the kids to know that people who looked like them created the Pyramids, and many of the iconic teachings and things most people consider to be Egyptian. Going to Southern Egypt was also very impactful because this is where most of the history is preserved. From a historical perspective, this taught them (and us) the true history, not just what someone told us in school. Ghana – The children learned about the history, not often mentioned of the land prior to slavery. They also learned of slavery and how it affects us today since a descendant of ours came through the area a few centuries ago (based on our DNA profile).

They also spent time in an orphanage for a few days helping out, so this was a good experience for them contributing to a cause greater than themselves and feeling fulfilled.

Finally, we wanted them to see that Africa had a really nice well-established side, and not just huts and people walking around in loinclothes like the media depicts in the West. Travel Noire: Can you offer any helpful tips for other parents exploring this idea?

Ike: Absolutely! Decide whether you will be slow traveling or fast traveling. We have found that slow travel is much cheaper as you can negotiate better rates on accommodations, see and experience more, and get to learn the ropes as a local and not just a tourist who’s in transit.

If this is a bit scary but exciting, try doing 2-3 months at a time to see how it works for your family. All kids are different and handle uncertainty differently! We have traveled extensively during the summers since they were babies, so they have built up the resilience needed to cope. Travel Noire: Where can you be found on social media for those who have questions?

Ike: Our journey is pretty much indexed on the following outlets:

Interview condensed and edited for brevity.