Jumping out of a moving plane, on purpose, isn’t necessarily the first thing in our minds when we think about a relaxing vacation. Brandon Johnson, however, jumps out of planes for a living. Brandon is now a full-time certified skydive instructor living and working in Dubai.

The 29-year-old hails from Arlington, Texas. He first moved abroad in 2014 to work as a security contractor in Kuwait. He was able to make several connections in Dubai after traveling there several times during his 2 years in Kuwait. He eventually moved to Dubai in 2017. He shared with us how he got into the industry, what his average day looks like, and his most memorable dive.

RELATED: How To Spend An 8-Hour Layover In Dubai

TN: How and when did you get into skydiving?

Brandon: I originally got into skydiving by watching videos on YouTube and thinking to myself that I just wanted to try it once, just to say I did it. While I was working in Kuwait in 2014, I took a trip to Dubai and saw they had a Dropzone that offered a school to learn to skydive and get your license (called AFF or Accelerated FreeFall Course). I decided to go through the course because I thought I was too big/heavy (6’3 220lbs) and didn’t like the idea of being strapped to another person while jumping.

I made the reservation for the course and a couple of weeks later, I found myself going through the ground school. Next thing you know I’m sitting in an airplane with my own parachute and two instructors that are about to jump out of the plane with me. I was absolutely terrified, second guessing my decision and, asking myself “why am I doing this?”

As soon as I got out of the plane, there was a strange, calming feeling that took over me. All of that fear and the thoughts I had on the ride up completely disappeared and it was like I was in another world. Freefall is hard for me to explain, but it’s one of the most liberating feelings a person can have. For those 45-60 seconds that you’re in freefall, nothing else matters but that moment. It’s an escape from everything in the real world, and I think that’s what makes skydiving so addictive for me. TN: Tell us what an average day is like for you as a skydiving instructor.

Brandon: An average day for me? I get to work at 10 am, check in at the front desk to see whether or not I’m going to be the tandem instructor on the jump or if I’m going to be the videographer for the jump. We always work in teams; which is one tandem instructor and one videographer for each customer. Usually whatever we start the day doing is what we do the entire day, video or instructor.

Tn: We recently saw Will Smith take a big jump for his birthday, tell us about your most memorable jump?

Brandon: I would say my most memorable jump would be the time Tom Cruise came to jump with us. It was a bit crazy for me because Top Gun is my favorite movie, and to have “Maverick” sitting right beside me in a helicopter flying up to altitude was a bit surreal. I am a bit bummed that I missed Will Smith the day he came to jump. I saw him walking past the back door but didn’t think it was him, so I didn’t think anything of it. No worries though, I’ll be patiently waiting for him to come back so I can ask if I can be his stunt double. Will, if you’re reading this, I am available for all of your skydiving stunts. 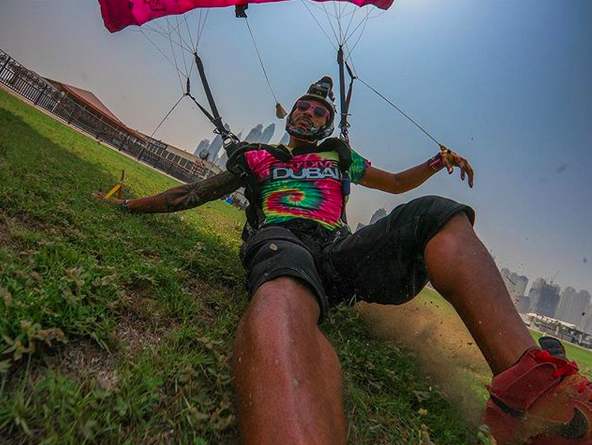 TN: As a black man in skydiving, what can you say to encourage other people of color to try it just once in life?

Brandon: One of the things I always hear is “black people don’t jump out of planes” or “that’s for crazy white people” or something along those lines. That’s probably one of the things that irritates me the most. People of color immediately shut down or don’t even consider a skydive. Statistically speaking, it’s safer than driving a car.

I feel that we as people of color need to get out of our comfort zones more often and go try those sports and activities that we think are “only for white people.” If anyone reading this has any questions about skydiving, I am more than happy to help guide you through the process of going for your first jump. There are also some groups and pages dedicated to people of color participating in these extreme sports. For example, Team Blackstar promotes skydiving in the African Diaspora and communities of color worldwide. There is also Melanin Base Camp which focuses on people of color in adventure sports. Both of those organizations serve as great examples and a good source of inspiration for us to get out there and do these things. TN: Where can our readers reach you if they have additional questions?

Brandon: The best way to contact me for questions is to DM me on my Instagram @FlyingJohnson. A passenger who was left stranded in Singapore after part of her wheelchair was lost while flying with Emirates can now resume her holiday.  Gemma Quinn, 35, was paralyzed from the neck down in a car accident in 1992. She booked a 19-day trip across Asia with her two caregivers which cost more than $19,000. […]