Flight attendants these days are willing to help in any way they can, even if the help is a little unorthodox.

A crew member on Philippine Airlines decided to take matters into her own hands by breastfeeding an upset baby when the mother ran out of formula. Patrisha Organo shared the story in a Facebook post on Wednesday. “Everything went smoothly until after takeoff, I heard an infant’s cry, a cry that will make you want to do anything to help,” Organo said. “I approached the mother and asked if everything’s okay, I tried to tell her to feed her hungry child. Teary-eyed, she told me that she ran out of formula milk. Passengers started looking and staring at the tiny, fragile crying infant.

“I felt a pinch in my heart,” she added. “There’s no formula milk onboard. I thought to myself, there’s only one thing I could offer and that’s my own milk. And so I offered.” Very interesting.

A supervising crew member escorted the mother to another section of the plane to supervise Organo breastfeeding the child. Continuing in her post, the 24-year old wrote, “the baby started rooting, she was so hungry. I saw the relief on her mother’s eyes. I continued to feed the baby until she fell asleep. I escorted her back to her seat and just before I left, the mother sincerely thanked me.” 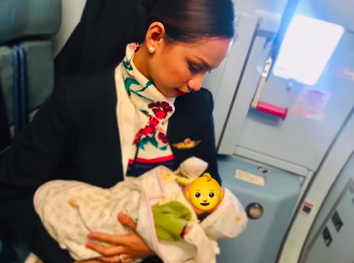 How would you feel about another woman breastfeeding your child? The proper term for it is called wet nursing and has been around for centuries. Before formula came along, there were no alternatives to breastfeeding so wet nursing was appropriate as long as the woman was healthy, not on medication and didn’t have any infections. These days, there can be a few downfalls surrounding it like having the composition of the milk being different if the babies in question are are different stages developmentally. There also can be a stop in the breast milk supply for the mother’s own baby. The FDA also frowns upon the practice, recommending that the parent consults with the child’s doctor first.

Organo has no regrets in helping the mother in need. Having a 9-month-old baby of her own, Organo is a breastfeeding advocate, which has led to national conversation this year as women become more open to breastfeeding their children in public.

Basking in her viral fame, the new mom has something else to be proud about as she passed her “check flight” evaluation, causing her to get a promotion.