Can We Carry Our Feminism With Us When We Travel?

I’ve always tried to be an open-minded traveler. I learned as a teen visiting my grandma’s village in Honduras that everyone’s version of “home” is different. So before each adventure, I do my best to strip myself of expectations and whatever preconceived notions I may have. I like to dive into the culture and mix with locals when I travel, and that was one of my goals when I went to Martinique. Although I often blend into the crowd because of my skin tone, truly adapting proved to be more difficult than I thought due to the language barrier and culture shock. 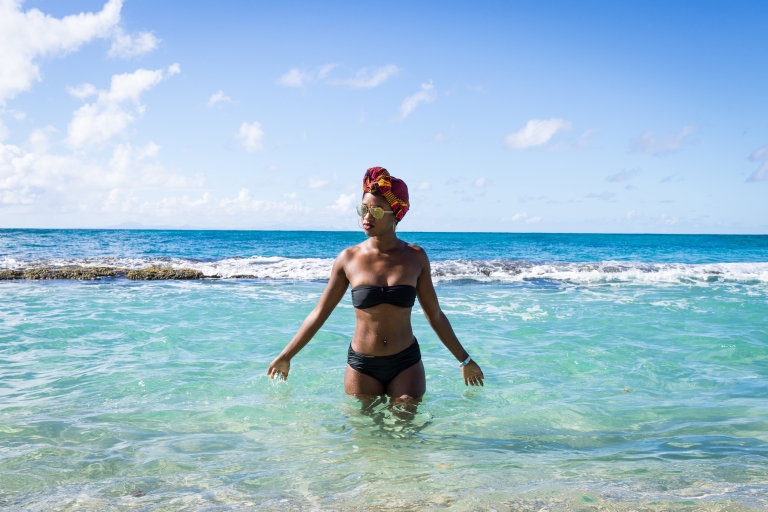 I’m often able to blend into the crowd in Martinique.. until it’s time to converse! Ha!

My biggest episode of culture shock happened one afternoon when I was having lunch at a friend’s house. I had already dined with his family several times, but I still wanted to make a good impression. Things were going well until we finished eating. Everyone breathed heavy sighs of satisfaction from a hearty, delicious meal. I began to recline, and as I did so his mom got up to collect the leftover food from the table. I thought nothing of it, as I usually do the same when I have guests over. I continued to sink into my chair while the only other woman at the table got up to collect everyone’s plates.

Next thing I knew, I felt a gentle nudge in the ribs as my friend nodded towards the kitchen. His brother and father continued to enjoy their food comas. I froze as I went through a wave of emotions. The back of my neck grew hot. “Hold up,” I asked myself “he can’t possibly be insinuating that I have to get up and do the dishes while he sits here?!” It felt like time stood still. Of course I wanted to be a polite guest, and helping with the dishes was absolutely not the problem. The problem was that we as women were expected to get up and clean while the men got to stay at the table without lifting a finger. Perhaps it’s because I grew up in a house of all girls, but I had never experienced something like that before. Whatever the reason, it rubbed me the wrong way.

Sometimes I’m able to blend in with the plants too!

I got up and quietly helped finish cleaning the table, but after the kitchen was clean and everyone excused themselves, I let my poor friend have it. “Why did you just sit there? What do you think this is? I was not raised to clean up after grown men!” I may have been overreacting, but I felt like he should have pitched in instead of putting me in an awkward position without fair warning. He chuckled and said that he understood where I was coming from and that he doesn’t personally expect women to carry out those types of roles; it was simply the polite thing for me to do, especially since I had already been over several times.

I tried to see his point, but it felt bigger than washing a pile of dishes or etiquette. I knew that the scenario would have played out differently if I had been a male friend, and it felt like I had to compromise my beliefs for the sake of respecting the culture. I know that’s what a good traveler is supposed to do, but it left me feeling a little uneasy. I’ve since learned to adapt, but it all makes me wonder – is there a line between conforming for the sake of respecting the culture and standing your ground on what makes you uncomfortable? I’m still not entirely sure.

This article originally appeared on One Girl: One World. Follow Francesca @onegrloneworld.