For Brownsville native, Rodney Bonds, entrepreneurship and creating dope businesses are in his blood. His mother was instrumental in helping Diddy’s restaurant, Justin’s, get its start. Now, Rodney is trying his hand at the restaurant business too.

“I found that there were not really any places to get good lobster rolls in Brooklyn,” Rodney told Travel Noire.

“Eating lobster the Brooklyn way”, is what Rodney and his team hope to introduce the world to.

For any new business, especially in the food space, you first have to figure out how to separate yourself from the rest. Sure, anyone can do lobster rolls if they find the right supplier, but Rodney decided to take things up a notch.

He sources all of his lobster from Maine and actually drives there to personally check on things himself.

But, what really sets BK Lobster apart from the rest is their unique Brooklyn-inspired signature rolls.

“Brooklyn is a melting pot of cultures and we wanted to be sure to have something that appealed to everyone. We named our rolls after different neighborhoods around Brooklyn.”

On the menu you will find items like the Flatbush roll which is topped with jerk sauce, the Bay Ridge roll with Italian peppers and dressing, and the Biggie roll that comes with well, extra meat.

The item that is quickly putting this BK eatery on the map, is the Golden Roll. This over-the-top roll has 3 cold water North Atlantic Gulf of Main lobster tails that are wrapped in a 24K gold edible leaf. Now that is what you call eating like the king and queen that you are. The roll even comes with a complimentary bottle of wine that has 23K gold flakes in it.

Rodney and his team recently teamed up with his mom, to reintroduce the world to her Mac and cheese that became famous at Justin’s. They will pair the Mac with lobster for a new lobster Mac and cheese dish. In the future, Rodney hopes to come up with a salmon and vegan option for those who don’t prefer shellfish or fish at all.

The space in itself brings a relaxed lounge feel with RnB night on Tuesdays, karaoke night on Wednesday, and game day on Thursday.

To learn more about BK Lobster check out their website: www.bklobster.com. You can also find them on Instagram: @bklobster. 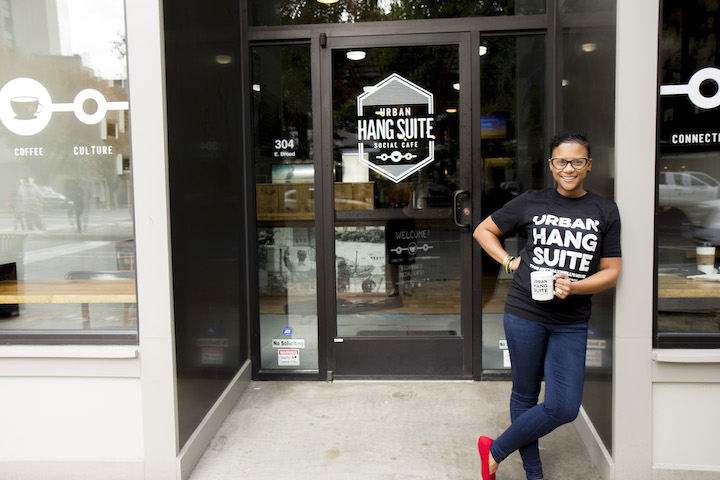 Sometimes stepping into your calling is as simple as hearing a stranger in an audience tell you to “just do it!” For Richmond, Virginia native Kelli Lemon, those three words were the motivation she needed to open the city’s latest Black-owned coffee hangout, Urban Hang Suites. Kelli was born in Hampton but her parents commuted […]