The Craziness of Holi Festival

By the time I was grew accustomed to Delhi, we were on our way to Vrindavan and Mathura, land of a thousand temples, to celebrate the Holi festival. We arrived late evening which gave us a great view of the illuminated temples, a sight that could only be described as divine. Arriving to our hotel look longer than anticipated because the streets were filled with excitement for the upcoming festival; even the monkeys seemed excited, which caused me to roll my window up.

The next day was the first day of the festival, but I was far too weak to participate. I hadn’t eaten in almost two days because of #delhibelly. So, I stayed in the room and read most of the day.  By evening, though, I was able to make my way to the hotel’s terrace to enjoy the festival from the roof. Lively, chaotic and colorful are the words that best describe the scene I’d witnessed. There was no way I could miss day two, which was the main day of Holi.

Luckily I felt better the next morning, so I tied my braids in a knot and covered them with an old t-shirt and CVS bag. Sonia and I were ready to enjoy the chaos. We had no idea what we were getting ourselves into.

Since we were tourists, we were easy targets; colorful powder got smeared in our eyes, ears, mouth, everywhere! We attempted to journey to the temple where more spiritually-based festivities were happening; however, the route became over bearing and very overwhelming.

This experience isn’t recommended for people who are uptight over their personal space. There is a lot of touching. Also, if you get easily panicked, nervous or claustrophobic, I recommend staying on the outskirts of the festival; things can get crazy. The paint and powder temporarily paralyze (not literally) you when it gets into your eyes and nose; the fumes and particles from the paint make it hard to breathe and see. In addition, Holi festival participants hardly take it easy on tourists, so while we were trying to clear our vision and catch our breath, we got more paint and powder thrown on us. This coupled with being in a foreign atmosphere was straight up overwhelming.

Thank goodness for our driver turned friend, Kashev, who protected us as best he could and warned participants to back off when things got crazy. In the end, I participated in the festival for about an hour. When the fun turned to discomfort, I took my behind back to the hotel and watched from the roof.  Holi festival was certainly an unforgettably fun and crazy experience that I’m glad I got to see up close and personal. 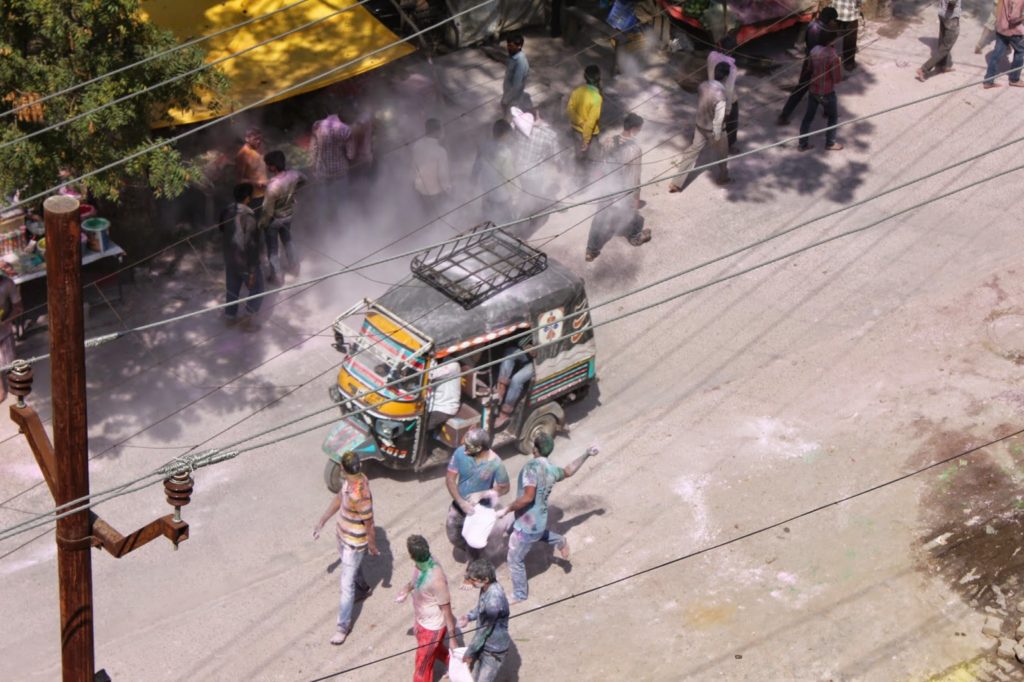 A lively Jamaican native currently residing in Brooklyn, NY. Sherri has a passion for life and all it entails, especially food and travel. Adventure and exploration satisfies her soul. A recent graduate and a full time concierge, She attempts to travel at least twice a year, one trip for relaxation and the other for knowledge and exploration and she does it on a budget. Her dream is to travel the world and while helping others. Slowly but surely she is checking off locations on her mini globe. she is currently in search of a career that allows her more travel opportunities . Getting To Grips With Delhi

India is a massive country, so to say I’ve seen India would not be exactly accurate, but I will say I’ve seen Delhi. Most travelers to India start out in Delhi; with flights arriving here, you might stay for a night or two depending on your travel itinerary. Arriving in Delhi for the first time […]