The Black Expat: ‘I Sing In A Multicultural Pop Band Around South Korea’

Mel is originally from Denver, Colorado. She has lived abroad since 2006 and spent nearly seven of those years in South Korea.

Mel works as a professor during the day. But, there’s a lot more to her story. She travels around South Korea singing in a multicultural pop band, in addition to a host of other creative ventures.

We spoke with her via email about life as a Black woman performing in South Korea. Travel Noire: Why did you initially move abroad?

Mel: A lot of things inspired the move — it was a complex decision. I hear a lot of people say that they move abroad because they want to see the world or create new things or save the baby flying squirrels in a rainforest and those are all admirable reasons. However, none of that applied to me. I also notice that a lot of people stateside love to accuse people who move abroad of running from something and that’s not really the case either — I always tell people wherever you go, there you are. You can’t run from yourself and that’s often the main problem people have when they move abroad. Honestly, I simply wanted to get to know more people and widen my viewpoint of the world. TN: How did you get into singing with your band?

Mel: I sing in a band called Earthling, created by the Asian Media Culture Factory in Seoul, a part of the Migrant Arts Center. We were put together initially just to open for a festival the center was putting on, but we got along so well and sound so good that we just sort of continued and have been together for nearly two years now. We’re a cheerful pop vocal team composed of a Mongolian guy (Idermunkh Nyam-Ochir), a Japanese lady (Amari Miho) and myself.

I got involved in the band because Miho and I were in a pansori class together and became friends. She was already volunteering at the center and invited me along one day. Pansori is traditional Korean opera — it’s a very unique art form that combines storytelling with a really distinct and emotional style of singing that you can only find in Korea. TN: Tell us more about Earthling and the types of events you perform at.

Mel: We sing in each other’s languages and in Korean. Because we’re a multicultural oddity but work together really well, we get booked at a lot of political and social art events like the DMZ Peace Art Festival, the opening of a disability rights center, and a special concert held on the International Day for the Elimination of Racial Discrimination in March 2018. TN: What has your experience been like as a Black woman?

Mel:  I feel like the key to being happy and free as a Black woman in a world that wants to build its hierarchy on our backs is to see yourself, first, foremost, and unapologetically as your own default. Don’t waste a lot of time trying to appeal to other people’s sense of aesthetics or propriety if it involves erasing yourself. I’ve felt that way for a long time. I’m a dark-skinned, short-haired, nerdy, happy Black woman in a place where that is the antithesis of femininity. While I recognize that some people will somehow see me as less or criticize me, I don’t see why their ignorance somehow has to become my personal problem. At the end of the day, I’m still on the stage and they’re still listening to my song. I don’t need everybody to change their mind, just clap on beat.

I’d be lying if I said I hadn’t had some bad experiences and days. My bandmates and art/music friends have been amazing at having my back and surprisingly open to having difficult conversations in my struggle when they’ve observed about how differently I am sometimes treated. It helps that we’re all foreigners or Koreans who are former expats, so we have a lot of mutual understanding about these things. TN: What is it like to sing in other languages?

Mel: My Korean is kind of low-intermediate, but I’m a good communicator.  When we learn a new song with lyrics in a language not all of us speak, the first thing we do is talk through the lyrics together and kind of bridge the gaps with the bits of language we do have in common so we all understand the meaning. Then we learn the lyrics and sing the song — but singing a song in a language doesn’t mean we speak the language fluently or at all!  We’re just patient with teaching each other and prioritize meaning over precision, at least at first. 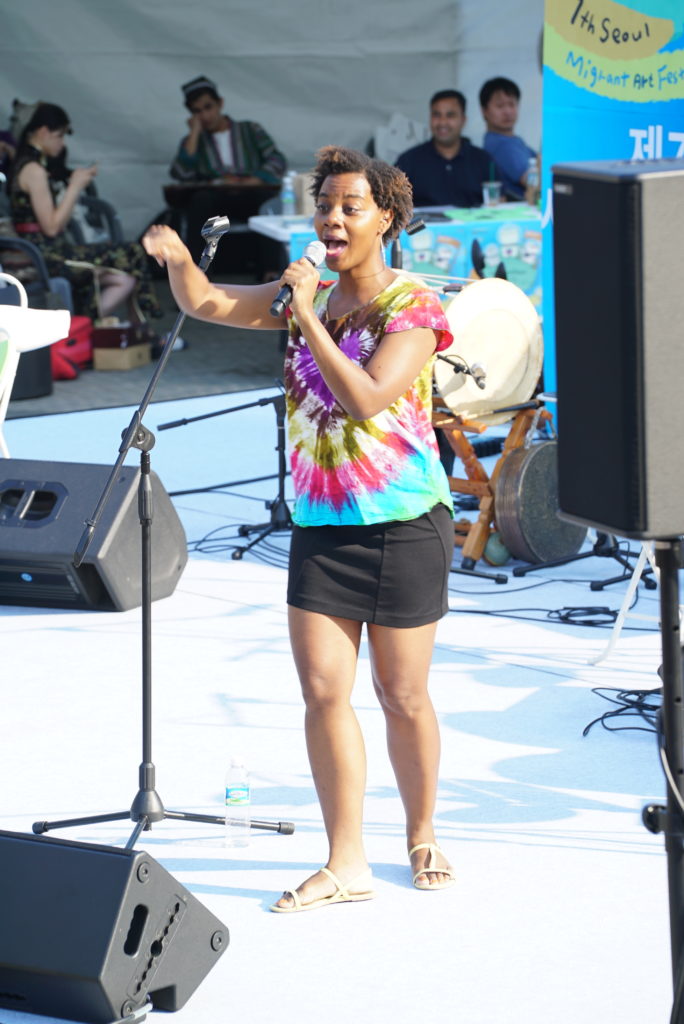 Related: My Daughter And I Got Deported From Kuwait

TN: Where can we find you online or learn more about your band?

Mel: I personally don’t have a super public branded presence on the internet because I am resistant to the idea that every person must be a product and every passion must be profitable. That said, you can find Earthling on Facebook.