Seattle is a food lover’s dream. If you are headed to the Emerald City, check out our list of the best Black-owned restaurants in the area.

This Black-owned chain has been frying up some of Seattle’s best fried chicken for over 30 years. The restaurant was featured on the popular show ‘Diners, Drive-ins, and Dives,’ so it must be delicious. The family-owned business was even asked to cater Oprah’s birthday party back in 1990. If it’s good enough for Oprah, then it’s good enough for us.

Dre Neely and Pepa Brower started this restaurant. Dre serves as executive chef where he brings a mix of Southern flare plus his taste from around the globe after being a military brat. The Seattle eatery offers brunch on Saturday and Sunday and features dishes like ‘Mint glazed lamb ribs’ and ‘Yam and bacon hash.’ Owner Donna Moodie, opened this restaurant to pay homage to her mom. Raised in Jamaica, Moodie shows off her skills of cooking from scratch while using local ingredients. The restaurant has been in Seattle for over 20 years and prides itself on bringing people together. According to the menu, you can find house-made sorbet and ice cream here. Yum.

Salare is located in North Seattle. It blends cuisines from Africa, the Caribbean, Europe, and  America. Owner and chef Eduardo is a native of Florida who gathered much of his inspiration for the business while studying in Italy. 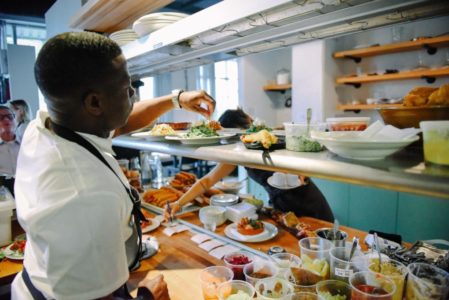 Breakfast is the most important meal of the day. Why not start with a great meal from this Black-owned restaurant? The idea for this restaurant began after Elizabeth Hammond passed her famous sweet potato pie recipe on to her daughter Barbara. Together with her sister Lillian, they went on to start Simply Soulful Pies and Catering. Today, they sell not only the infamous pie but also delicious soul food. Breakfast is served all day in addition to other soul food favorites.

Also owned by Chef Eduardo of Salare, the focus here is on Southern cuisine. With Southern staples like oxtails, fried catfish, and “chitlins,” June Baby looks to show that Southern cuisine is to be respected and celebrated. They feature a “Moonshine Hour” every day from 3-5pm. 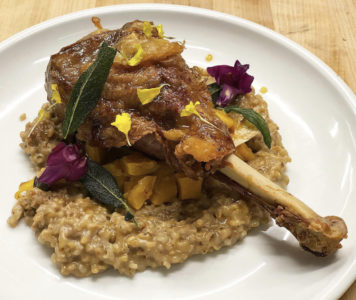