50 In 50: Best Black-Owned Seafood Spots In Each State

From Creole, to Caribbean, to Southern Cuisine, there are a variety of black-owned restaurants across the country that specialize in seafood dishes. Here’s a list of some of the best black-owned seafood spots in each state.

Cloray’s Café in Bessemer is where you want to go during your next visit to Alabama for its fish plate that includes candied yams, broccoli and cheese, and a piece of cornbread.

Roscoe’s Catfish & BBQ in Anchorage is where you will find traditional Louisiana gumbo with an Alaskan twist. And if reindeer sausage isn’t your thing in gumbo, you can also try their southern fried catfish fillet.

Brown stew fish, curry shrimp, and ackee and saltfish are just some things you will find on the menu at Hot Pot Caribbean Cuisine: an authentic Jamaican Caribbean restaurant that’s located  in Chandler.

When Kontiki African Restaurant’s owner Christian Domingo migrated from Sierra Leone to Arkansas and with him, he brought his passion for cooking and teaching people about African Cuisine.

You have a few seafood options at this restaurant, including cassava leaves and rice or couscous and fish. With so many seafood options on the menu, Two Jack’s Nik’s Place in San Francisco will not disappoint.  You can choose from Snapper, Rock Cod, Oysters, Prawns, fillet of Sole, and more.

Welton Street Cafe is known for its southern comfort food and Jamaican-inspired dishes.  The fried catfish served with classic soul food sides are popular among Denver locals and tourists alike.

The Swirl Wine Bistro is a cozy spot and fusion bistro in Coconut Creek. The Snapper Escoveitch is the must-try seafood dish on the menu.

Yes, you can find black-owned restaurants in Hawaii and Hughley’s Southern Cuisine in Aiea is where you will find some of the best catfish and fried tilapia.

Brown Shuga Soul Food Truck is a family run business in Boise, where the owner, Yvonne Anderson-Thomas and her son offers dishes like jambalaya and gumbo, which include seafood, through two food trucks and catering.

Not sure why you try seafood anywhere else except Chef Oya’s The TRAP in Indianapolis. Just look at the picture below: 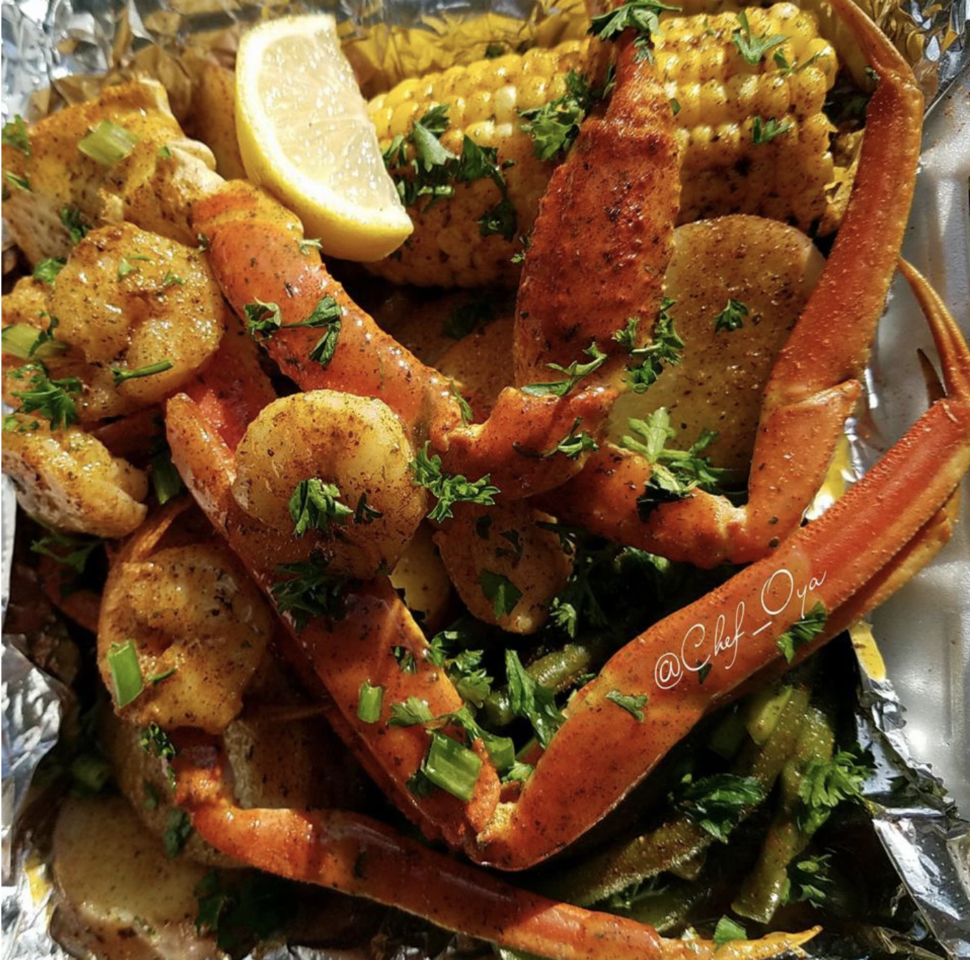 Suga Peach Chicken & Fish Fry in North Liberty offers premium mild catfish that you can order as a fish sandwich, or one, two, or three-piece meal.

We couldn’t find a black-owned seafood restaurant in Kansas itself, but across states lines in Kansas City, Missouri is Rush One Foods.  Owners say they deliver “quality consistent food that taste great every single time.”

There are so many options at the Seafood Lady restaurant in Louisville that you will not be disappointed.  You can choose from crab clusters, lobster tails, gator tail and more.

There are so many options throughout Louisiana but Ray’s On The Ave in New Orleans combines excellent service with amazing food and live music.

Me Lon Togo in Searsport brings the delicious flavors of West Africa to the Mid Coast.  The seafood gumbo is what you want to try.

Maryland is home to the Chesapeake Blue Crab and if you’re looking for an intimate place to enjoy a rite of passage in visiting Maryland, head to Fresh Fresh Seafood in Towson.

Maty’s African Restaurant is one of the first Senegalese restaurants in Detroit. If you’re wondering what to try first, try their fish dish which they cook whole with mustard power, onion, pepper, and vinegar. 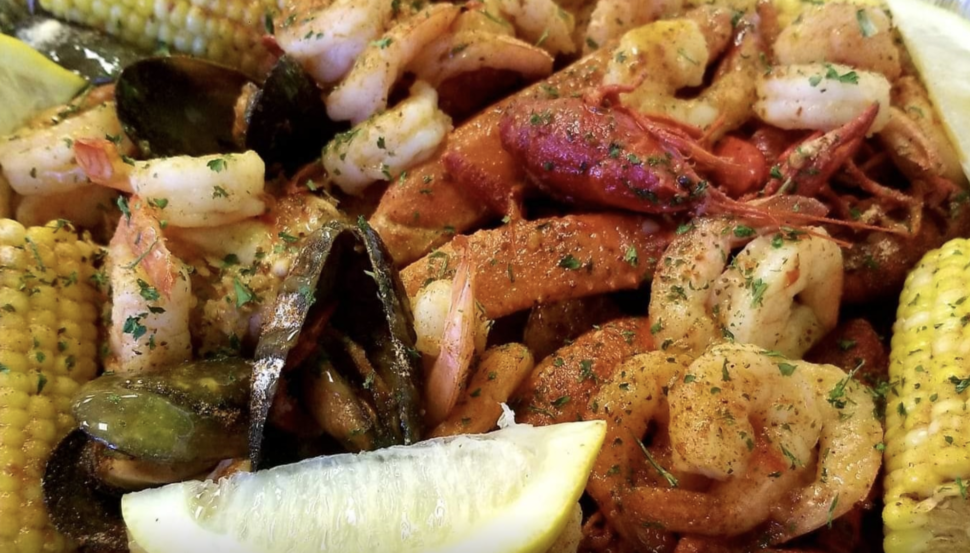 Perry’s Caribbean & Seafood Kitchen in Biloxi offers guests an authentic Caribbean experience and is home to the best Ackee & Saltfish and boil dumplings in Mississippi.

Originally from Ethiopia, Mengesha Yohannes, co-owner of Bar Italia, helped to create a menu that features great Italian food and wines from around the world.  We recommend the seared diver scallops and pappardelle on the menu.

The Sassy Biscuit in Billings has clam chowder served with roasted garlic and house smoke bacon on its menu.

Salmon Croquets, catfish nuggets and fillets, and New Orleans sausage and shrimp are just some things Quick Bites Soul Food in Bellevue offers on its menu.

During your next trip to Las Vegas, be sure to stop by Ella Em’s Soul Food for some hearty soul-food and seafood options.

Despite its low population of black people living in the state, Sunshine Cookshop Jamaican Style Cooking in Claremont is there to diversify food options. Nexus Brewery and Restaurant in Albuquerque is one of the few black-owned breweries in America and where you will find some of the best tasting gumbo in New Mexico.

Your next island getaway just got a lot closer thanks to Executive Chef Raymond Mohan and Leticia Young.  They opened LoLo’s Seafood Shack in the winter of 2014 to offer customers a variety of seafood options ranging from the coastal comfort foods of the Cape like sauced shrimp to Caribbean street eats like our crunchy conch fritters, according to its website.

Don’t let the name confuse you, Dame’s Chicken & Waffles has shrimp and grits and blackened salmon.

Madina Cuisine is a casual east African restaurant in Fargo.

RELATED: 50 In 50: The Best Chicken And Waffles In Each State

One review about Simplee Deelicious in Columbus stated, “best food around .They have everything you could imagine for cheaper prices.

There’s a reason why Off The Hook Seafood in Oklahoma City has a following of more than 20,000 on Facebook.

The Trap Kitchen has two locations and one of them happens to be in Portland. Nana’s Seafood & Soul in Charleston prides themselves on serving their community with the freshest seafood and delicious Gullah-Geechee Cuisine that Charleston has to offer.

O So Good Restaurant in Garretson specializes in seafood and comfort foods.

Depending on your mood what’s great about Seafood Sensation in Nashville is that they have grilled, steamed and fried options for your favorite seafood platters.

Cafe 4212 has one of the best lounges in Houston and an array of amazing seafood dishes to try. Mango Mangeaux in Hampton serves their fried fish and grits with your choice of the catch of the week  or fried salmon.

The seared scallops at Marjorie Restaurant in Seattle will have you back in the state of Washington before you know it.

Named as one of the top food trucks in the country, Dem 2 Brothers And A Grill specializes in more than just ribs, burgers and hotdogs. If you see one of their yellow trucks rolling around in Charleston, just know that fish is indeed on the menu.

If you’re looking for a fusion of cultures, Irie Zulu in specializes in both African and Jamaican cuisine.  It’s also one of few places in the state where you will find Yassa Djeun:  Fish in caramelized onion sauce, lemon, olives, mustard, served with rice. Simply Soul in Cheyenne was the only soul food restaurant that was black-owned in Wyoming but the restaurant’s contract ended with the Air Force Base back in 2018. According to a Facebook Post, the restaurant will set up shop in a new location.  You can stay up-to-date here. Residents in South Los Angeles are making their message clear: they like their coffee black – as in Black-owned.  From Inglewood, View Park, Windsor Hills, and Jefferson Park, and neighborhoods in between, South Los Angeles is currently undergoing a cultural renaissance where the number of Black-owned cafes has increased in the last year.  According to […]