I once held the ignorant belief that Middle Eastern countries were all similar. I thought that they were all countries with desert locales, all holding on to archaic and outdated interpretations of Islam much like Saudia Arabia. I was wrong. Each individual country holds a wealth and art, history and tradition that has withstood the test of time and remains a vibrant part of modern day society.

During my time in the Middle East, I found myself in the Kingdom of Bahrain for the first time. Before my visit, the only time I had ever heard of the country was back in the early 2000s when a story of a marine somehow eloping with a Bahraini princess and running away to the US was a Lifetime movie. Similar to the Emirates, the Kingdom as it is also known to locals, is also an oil-rich country full of sheiks, businessmen, and an assortment of foreign immigrants working on extended contracts. It is also an island oasis playground for the rich and famous and is known for a more Western-friendly environment than Dubai as the alcohol is plentiful and foreigners are not afraid to show more than a little bit of skin. I came to find out that Bahrain is a rather liberal destination for travelers to the Middle East. 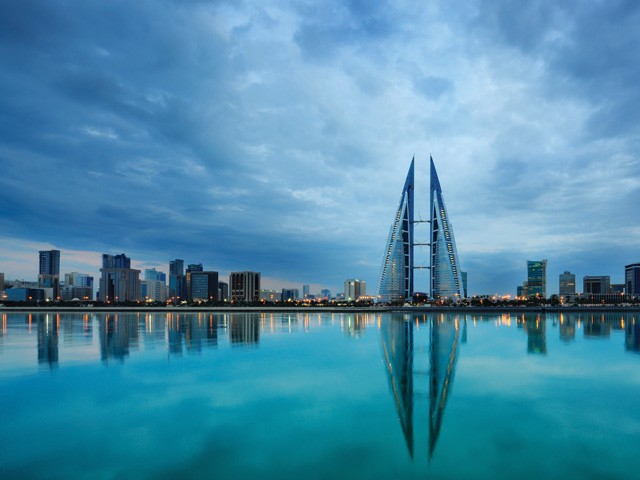 Friday is the Islamic Holy day and their equivalent of a Sunday. I had the misfortune of arriving on a Thursday night to begin my 24 hour period. After a five hour flight on Gulf Air from Frankfurt, I arrived in Bahrain. After a simple trip through customs, my passport was briefly scanned, stamped, and I was on my way.

I initially thought the weather would be too hot for me, but when I arrived, there was a nice cool breeze and the temperature was bearable. A short walk to the shuttle and we were on our way to the hotel, the Movenpick Bahrain. Bahrain is very expensive, $3 USD to 1 Bahrani Dinar, so anyone seeking to have a cheap meal should probably look in a local area frequented by immigrants or stick to familiar American restaurants that will be relatively cheap. Since it was evening time when I arrived and my hotel was essentially isolated, I ended up eating in my hotel.

The next morning, I was ready! My colleagues and I hopped into the hotel shuttle that drops visitors off on the main island at one of the many souks. As we drove to the main island, I noticed how clean the streets were. There was no trash on the ground, the grass was neatly cut and freshly watered, and everything seemed to sparkle with a new or clean gleam. Typically in Middle Eastern or African countries in the desert, there are huge piles of trash or unfinished construction everywhere. Not so much here. There were many workers out in the streets sweeping, gardening, polishing. Even the water, as beautiful as it was as we crossed over to the main island, seem to be a sparkling blue. The waters of Bahrain rival the Caribbean for the cleanest and clearest water I’d ever seen.

As a business-oriented country, there was no shortage of tall skyscrapers.  Our 20-minute drive lead us past dazzling towers, beautiful malls, and glass covered buildings. One building which is actually two in one, the Bahrain World Trade Center, even had three large turbine windmills in its center so powerful that they could power both buildings and several homes at the same time.

When we arrived at the souk, we arrived at yet another mall, but this mall was surrounded by many small shops that seemingly catered more to the international crowd of domestic workers than the local Bahrainis. I honestly had no idea where we were and followed the crowd. My coworker Andy, who had been there several times before seemed to lead the way, so we followed him.

The first thing we had to do was get cash. If you ever go to a wealthy foreign country, don’t make the same mistake I did! The conversion rate is $3 USD to 1 BHD. In my attempt to take out $50 USD I took out way more than that, but since I had it, I decided to spend it.

One of the most interesting experiences for me was witnessing the call to prayer. Devout Muslims pray several times a day as required by their religion. Given that my husband is Moroccan and having traveled many times to Morocco and various parts of the Middle East, I thought I was aware of what this was like, but I had not seen prayer like this before. As soon as the prayer time began, everything stopped. Shops were closed and the silence was deafening. There was no walking, no movement except men gathering their prayer rugs to come together in the middle of the streets and alleys to pray. Even drivers stopped alongside the road and piled into the many mosques that dotted the area or simply prayed by their cars. I also noticed that most of the women seemed to disappear during the prayer. Pretty soon we got the hint and realized that walking and talking were considered disrespectful at these times. A couple of dirty glances at Andy also indicated that pictures taken during the prayer times wasn’t appreciated either. After a few moments, the prayers were soon over and everything returned to normal as though nothing had happened.

There’s only so much you can do at a souk and it wasn’t long before the heat wore us down enough to stop inside a mall for cold drinks. This is where we discovered the women, or more specific, the Bahraini women. Clad in their midnight black abayas and niqabs, they sat in huge groups and chattered. Our group, which was a mix of men and women, stood out in comparison. We discussed our plans for the next hour and set off to the gold souk, which is a small mall selling strictly gold, jewelry, and Bahraini souvenirs. An hour or so later, shopping bags in hand, we were ready to return to the hotel. We were all anxious and excited to experience the lunch buffet being served that afternoon. 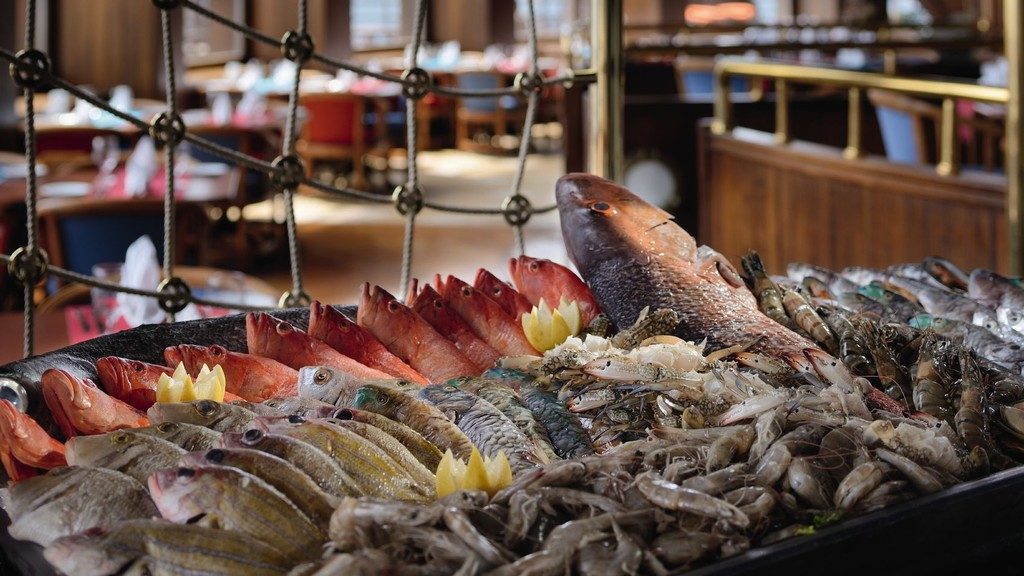 Oh. My. Goodness. That lunch buffet! I have never seen a seafood spread like the one at Movenpick Bahrain. The setup was very similar to hibachi. You take an empty plate around the room and select the raw seafood that you want. You then take your plate to the register where an attendant asks you how would you like your food cooked. You have four options: Thai, Grilled, Sauteed, and Wok style. Considering that I an absolute foodie at heart I chose to get three different options. You then leave your food at the register and the food is delivered to your table once prepared. While you wait, you can browse the large assortment of cheese, dessert, and a surprising amount of wine and alcohol. The food doesn’t take long to cook and it was absolutely fantastic.

I spent the rest of the day at the pool where I met a Lebanese couple who, get this, shacked up, in Bahrain but frequented stays at Western hotels across the tiny island and Europe to escape the strict religious environment. There were also other Americans who actually lived at the hotel courtesy of the US Government due to the nature of their business in Bahrain. The pool was simple and nice, and it was suitable for some afternoon rest and relaxation. Sitting by the pool, I began to question if I was being culturally respectful. Clad in a bikini with a mojito in hand I wondered if I was drawing attention to myself in an environment that usually does not tolerate excessive skin, though I did enjoy lounging by the pool.

As the night crept in, we each slowly retired to our rooms to prepare for the next day. Our adventure was over and we would be heading to a new destination, Bucharest, Romania, in the morning. Resting in my firm, comfortable king bed, I reflected over my experience and I’m can honestly say that I’m glad that I got to visit and experience a place I never thought I’d see in this lifetime.

Alicia is a frequent traveler who clearly loves to travel frequenting places such Germany, Japan, and Angola often in addition to a variety of destinations around the world. She is also an avid photographer who enjoys taking pictures of the places she goes and sharing them with the world. If you have come to the conclusion that you want to move abroad, there are a lot of things to consider: lifestyle, the needs of your family, budget, language barriers, the list goes on and on. Based on quality of life and a currently thriving community of expats, here are some of the top destinations […]